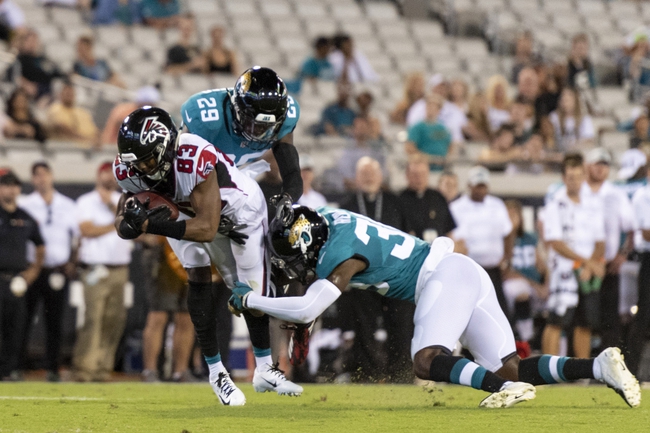 The Atlanta Falcons are 0-4 in preseason action and haven’t won an exhibition game since September of 2016, ironically against these Jacksonville Jaguars. Matt Ryan and Danny Etling combined for 80 passing yards, zero touchdowns and zero interceptions. Etling led the Falcons with 48 yards on seven carries, while Justin Hardy had 24 receiving yards on one reception. Defensively, Duke Riley led the Falcons with seven tackles, Deadrin Senat had one sack and Austin Larkin had one tackle for loss. The Atlanta Falcons have scored 10 or less points in three of their first four preseason games and are coming off a game where they averaged just 4.1 yards per play. Including this game, the Falcons will be on the road for five of the next seven weeks. The Atlanta Falcons have lost each of their last 12 preseason games.

The Jacksonville Jaguars are 0-3 in preseason play and have scored a combined 17 points in those games. Gardner Minshew and Nick Foles combined for 176 passing yards, one touchdown and one interception. Leonard Fournette led the Jaguars with 27 yards on seven carries, while C.J. Board had 56 receiving yards on four receptions. Defensively, Josh Robinson led the Jaguars with six tackles, Dawuane Smoot had one sack and C.J. Reavis had two tackles for loss. The Jacksonville Jaguars have done absolutely nothing offensively this preseason and that’s not expected to change much with the backups getting all the reps in the final contest. With an average of 5.6 points and 13.3 first downs through three games, the Jags look lost whenever they take the field. The Jacksonville Jaguars have split their last six preseason games.

The Atlanta Falcons haven't won a preseason game since the Titanic sank, so I guess I can understand them being in the underdog role. However, there's no way I'm laying chalk with a Jacksonville Jaguars team that's done nothing offensively through three games. The Jags aren't playing with much life and haven't been able to move the ball the length of a coffee table most drives. Give me the Falcons and the free points.