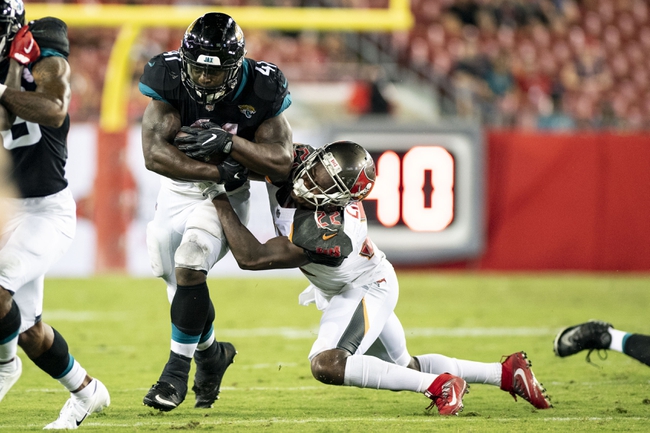 The Tampa Bay Buccaneers hit the road for a clash with the Jacksonville Jaguars.  The Buccaneers are (4-7), after a 35-22 win over the Atlanta Falcons.  The Jaguars are also (4-7), coming off a 42-20 loss to the Tennessee Titans.

In the Buccaneers win over Atlanta, Tampa Bay was led on offense by Jameis Winston.  Winston completed 18 of 28 passes for 313 yds, while throwing 3 touchdowns and 2 picks. Chris Godwin had a tremendous outing, recording 7 receptions for 184 yds and 2 touchdowns. Tampa Bay out gained Atlanta 446 to 337 on the day.  The Buccaneers forced 2 turnovers, while committing 2 themselves.  The Buccaneers held the Falcons to just 57 yds rushing.

In the Jaguars loss to the Titans, Jackson was guided on offense by Leonard Fournette.  Fournette had 97 yds rushing on 24 carries. The Jaguars were out gained on the day 471 to 369.  The Jaguars kept up their less than stellar rush defense in this one, giving up 219 yds rushing.  It was a low scoring game going into the 3rd quarter, as the Jaguars trailed 7-3.  Tennessee scored 21 points in a 3 minute span to put this one on ice.

Buccaneers are 1-6 ATS in their last 7 games overall.

Buccaneers are 7-1 ATS in their last 8 games in December.

The over is 9-0 in Buccaneers last 9 games overall.

Jaguars are 2-5 ATS in their last 7 games overall.

Jaguars are 4-0 ATS vs a team with a losing record.

The over is 4-1 in the last 5 matchups between the two.  Jacksonville is favored here, but I'm not sure why.  The Jaguars have been essentially throttled the last 3 games and are on a 3 game losing streak.  Tampa Bay is coming off a win against the Falcons, who had won 2 in a row.  The Buccaneers have won 2 of 3 and almost beat the Seahawks in Seattle, but lost in overtime.  The Jaguars defense just has not looked good in awhile, I'll take Tampa Bay to win on the road.  Final score prediction, Buccaneers win, 27-24.