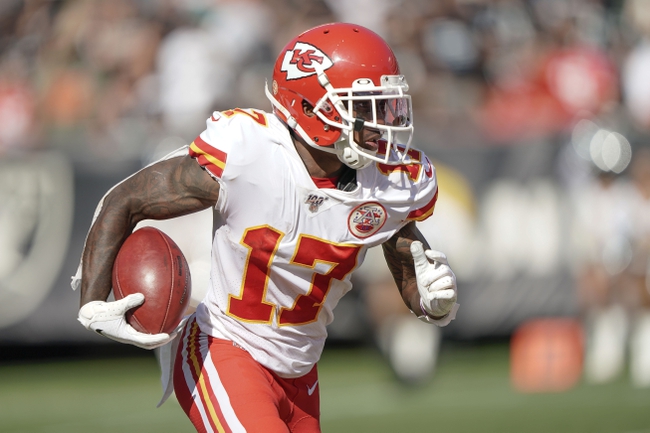 The Baltimore Ravens and the Kansas City Chiefs meet in a marquee week 3 NFL matchup from Arrowhead Stadium on Sunday afternoon.

The Baltimore Ravens will look to build on their 2-0 start to the year after a 23-17 win over Arizona in their last outing. Lamar Jackson has thrown for 596 yards and 7 touchdowns on 71.9% passing while Mark Ingram II has rushed for a team-high 154 rushing yards and 2 touchdowns and Jackson has 126 rushing yards from the QB position this year. Marquise Brown leads Baltimore in receiving with 233 receiving yards and a pair of touchdowns while Mark Andrews has 16 receptions on 17 targets for 220 receiving yards and 2 touchdowns. Defensively, Patrick Onwuasor has 10 tackles including 7 solo tackles while Matthew Judon has a pair of sacks and Anthony Averett has a team-high 8 solo tackles. As a team, Baltimore is averaging 541.5 yards of total offense and 41 points per game while allowing 274.5 yards of total defense and 13.5 points per game against this season.

The Kansas City Chiefs will also look to build on a 2-0 start after a 28-10 win over Oakland in week 2. Patrick Mahomes has thrown for 821 yards and 7 touchdowns on 71.4% passing while LeSean McCoy has rushed for 104 yards this season. Sammy Watkins leads KC’s receiving group with 15 catches for 247 yards and 3 touchdowns while Travis Kelce has 10 grabs for 195 yards and Demarcus Robinson has 172 receiving yards and 2 touchdowns this season. Defensively, Kendall Fuller leads KC’s defense with 14 tackles including 9 solo tackles while Anthony Hitchens has 12 tackles including 9 solo tackles of his own. As a team, Kansas City is averaging 477.5 yards of total offense and 34 points per game while allowing 367.5 yards of total defense and 18 points per game against this season.

This game features two of the better offensive teams through the first two games of the season but Baltimore has been the better of the two defensively. Now with that said, those games were against a bad Miami team and a probably bad Arizona team with a rookie under center and the Arizona Cardinals still made the Ravens sweat a bit and kept that game really close. Kansas City is as good as they were last season, especially on the offensive end and have been solid on defense against better competition. Kansas City did their damage on the road as well. I just think Arrowhead is going to be rocking for the home opener and will make life difficult for Jackson and the rest of the Ravens so I’ll lay the points with Kansas City at home here.