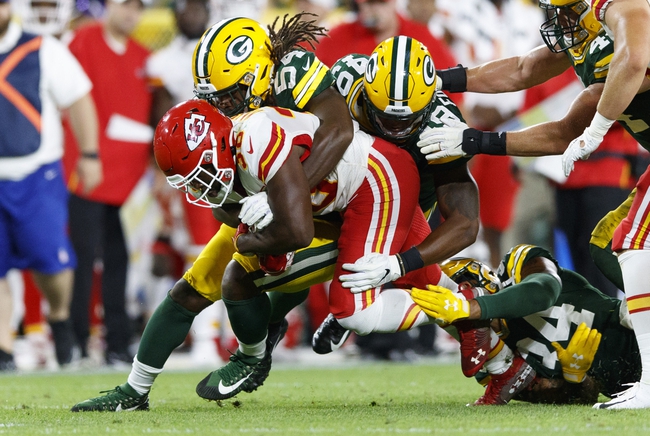 The Green Bay Packers face off against the Kansas City Chiefs in a road contest during primetime.  The Packers enter this road game with a record of 6-1 and having won 3 in a row.  The Packers won at home 42-24 against the Raiders during week 7.  The Chiefs enter this home contest with a 5-2 record.  The Chiefs have extra rest leading into this game, having won Thursday night at Denver 30-6.

The Packers were led by Aaron Rodgers in the win over the Raiders, he was 25/31 passing for 429 yds.  He added 5 touchdowns through the air, while also adding a rushing touchdown. Marquez Valdes-Scantling had 2 receptions for 133 yds and a touchdown.  There were 8 different players that recorded at least 2 receptions in the game.  The Packers forced 2 turnovers defensively.

The Chiefs head into this Sunday night football matchup with some uncertainty.  Patrick Mahomes left the game against the Broncos with an injury and is unlikely he will play.  When he went out with the injury, the Chiefs turned to backup Matt Moore to lead the offense. Moore was 10/19 for 117 yds and a touchdown in the absence of Mahomes. Tyreek Hill led the team with 74 yds receiving.  One of his 3 receptions was a touchdown. Harrison Butker was 3 for 3 on field goals in the game.  The Chiefs added a defensive touchdown in the win.

The Packers are 2-0 ATS as an away team this season.

The over is 4-3 in Packers games this season.

The Chiefs are 1-0 ATS this season with rest advantage.

The over is 4-3 in Chiefs games this season.

Packers come into this game trying to improve to 7-1 on the season.  The Packers are going to need Rodgers to play like he did last week, if they want to snag a road win in Kansas City.  The Chiefs defense is awful against the run and in the middle of the pack when it comes to passing defense.  The Chiefs rank 25th defensively in allowing 377 yds per game.  This just isn't the same matchup with Mahomes more then likely out.  Mahomes if he plays, isn't going to be 100% and without a healthy Mahomes, I don't see the Chiefs covering.  No disrespect to Matt Moore but he isn't Patrick Mahomes. Final score prediction, Packers win and cover 27-21.