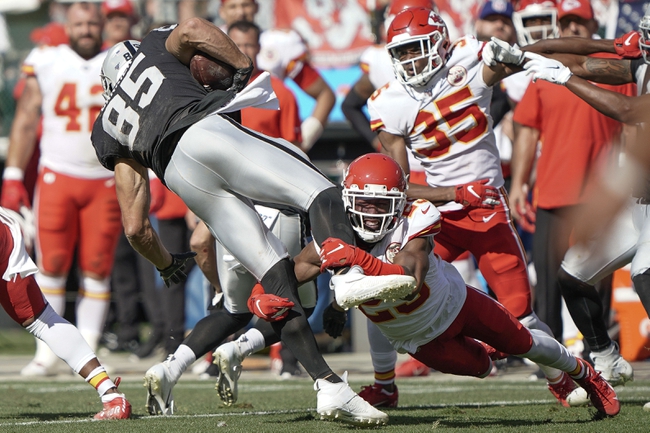 The Oakland Raiders are on the road for a divisional battle with the Kansas City Chiefs.  The Raiders are (6-5), after getting blown out by the New York Jets, 34-3.  The Chiefs are (7-4), coming off a 24-17 win over the Los Angeles Chargers.

In the Raiders loss to to the Jets, Oakland was only able to muster a Daniel Carlson 48 yd field goal.  The Raiders actually scored first, but then saw the Jets score 34 unanswered points.  Derek Carr was held to 127 yds on 15 completions and 1 interception. The Raiders were out gained 401 to 208.  Oakland had 2 turnovers in the loss.

In the Chiefs win over the Chargers, Kansas City was guided by Patrick Mahomes.  Mahomes completed 19 of 32 for 182 yds, while throwing a touchdown and an interception.  Travis Kelce added92 yds receiving on 7 receptions and a touchdown.  The Chiefs were out gained 438 to 310 on the day.  The Chiefs forced 4 turnovers, en route to the win.

Raiders are 8-1 ATS in their last 9 games following a SU loss.

Chiefs are 1-4 ATS in their last 5 games in December.

The home team is 5-1 ATS in their last 6 meetings.  Oakland was just blown out by a below average Jets team.  The Raiders are trying to make their way into the playoffs and will need a big performance here to get past the Chiefs.  The Chiefs already beat the Raiders once this year, 28-10.  Both teams have given up more then a few points in games this year.  I look for Josh Jacobs to have a big game against the 30th worse rush defense in the league.  Jacobs play will help keep the Raiders in the game.  I'll take the over here.  Final score prediction, Chiefs win but the total goes over, 31-24.