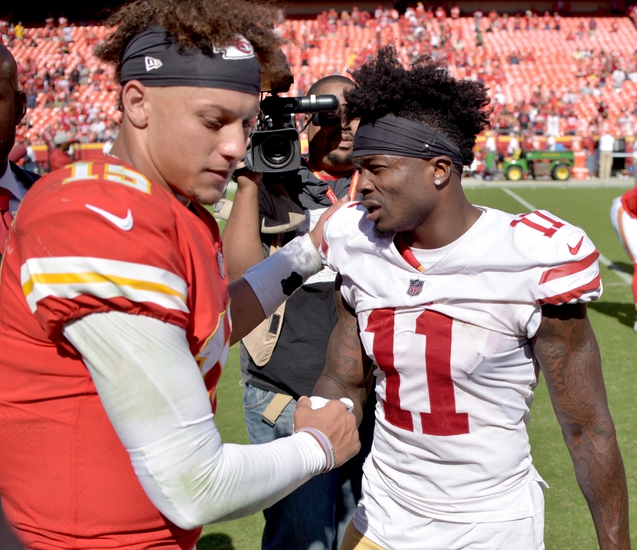 The San Francisco 49ers are 2-0 in preseason action after a 24-15 win over the Denver Broncos. C.J. Beathard and Nick Mullens combined for 108 passing yards and one touchdown. Raheem Mostert led the 49ers with 58 yards and one touchdown on six carries, while Mostert had 42 receiving yards on two receptions. Defensively, Jeremiah Valoaga led the 49ers with seven tackles, Kentavius Street had 1.5 sacks and Jaquiski Tartt had two tackles for loss. Mostert wasn’t even expected to play due to a concussion, and he ended up balling out, possibly earning a role in the running back depth chart. The San Francisco 49ers have also allowed a combined 24 points in two preseason games and have produced a combined nine sacks. Meaningless games or not, the 49ers have been one of the sharper teams up to this point and it will be interesting to see if this sort of effort can carryover to the regular season. The San Francisco 49ers have split their last six preseason games.

The Kansas City Chiefs are 1-1 in preseason action after a 7-17 loss to the Pittsburgh Steelers. Chad Henne and Chase Litton combined for 183 passing yards and one touchdown. Darwin Thompson led the Chiefs with 30 yards on four carries, while Cody Thompson had 69 receiving yards on seven receptions. Defensively, Ben Niemann led the Chiefs with seven tackles, Alex Okafor had one sack and D'Montre Wade had one tackle for loss. The Kansas City Chiefs offense was able to move the ball and actually converted on six of 15 third down attempts, but they weren’t able to finish drives. Of course, at home and with the starters expected to play an expanded role, you should see an explosive and fun team at least for the first half. The Chiefs have scored a combined 24 first half points through their first two preseason games. The Kansas City Chiefs have split their last six preseason games.

The San Francisco 49ers have been impressive in preseason play up to this point and have a defensive front that's been getting after it. However, the third preseason game is when the starters play a good chunk of the game, and there's few teams better than the Chiefs, especially when playing at Arrowhead. After not finishing drives last week, I expect the Chiefs to get rolling offensively and put up some points in this contest. I'll lay the reasonable chalk with the home team.