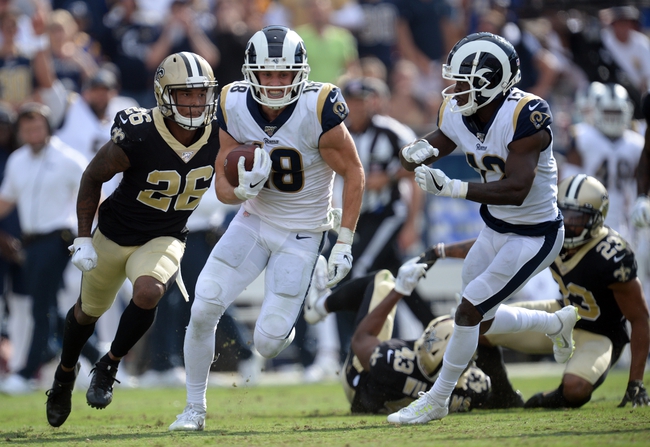 The Los Angeles Rams and the Cleveland Browns meet in a week 3 inter-conference matchup in NFL action from FirstEnergy Stadium on Sunday Night Football.

The Los Angeles Rams will look to remain unbeaten after improving to 2-0 on the year after a 27-9 win over New Orleans in their last outing. Jared Goff has thrown for 469 yards, 2 touchdowns and an interception on 62.7% passing while Todd Gurley II has a team-high 160 rushing yards and a touchdown. Cooper Kupp leads the Rams in receiving with 166 receiving yards and 12 receptions while Brandin Cooks has 113 receiving yards and Robert woods has 103 receiving yards this season. Defensively, Cory Littleton leads the Rams with 22 tackles, including a team-high 13 solo tackles while John Johnston III had 17 tackles and Dante Fowler Jr. and Clay Matthews each have a pair of sacks this season. As a team, Los Angeles is averaging 364.5 yards of total offense and 28.5 points per game while allowing 293.5 yards of total defense and 18 points per game this season.

The Cleveland Browns will look to build on their first win of the season, beating down on the Jets by a final score of 23-3 to improve to 1-1. Baker Mayfield has thrown for 610 yards, 2 touchdowns and 4 interceptions on 60.3% passing while Nick Chubb leads the Browns in rushing with 137 rushing yards and a touchdown. Odell Beckham Jr. leads Cleveland with 232 receiving yards and 13 receptions while Jarvis Landry has 99 receiving yards and David Njoku has a receiving score as well this season. Defensively, Joe Schobert has 21 total tackles, including 15 solo tackles while Myles Garrett has a league-high 5 sacks through 2 games this season. As a team, Cleveland is averaging 360.5 yards of total offense and 18 points per game while allowing 300.5 yards of total defense and 23 points per game this season.

I get the argument for the home dog, as Los Angeles barely scraped by Carolina in week 1 and took down a Saints team in week 2 that was without Drew Brees for most of that game. However, you could make the same argument against Cleveland. The Browns were absolutely smashed in week 1 by the Titans and took down the Jets in week 2 who were essentially playing most of that game with their 3rd string QB in who hasn’t had much if any time practicing with the first team offense. The Browns have a lot of individual talent, but we’ve yet to see them really gel together and show signs of being a cohesive unit from top to bottom. Los Angeles is the better team here and I think they win this one by at least a touchdown, so I’ll lay the points with the Rams here.