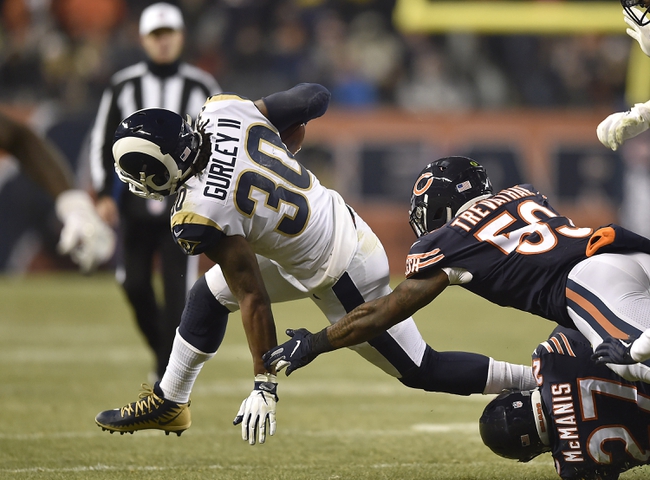 The Chicago Bears travel to California to take on the Los Angeles rams.  The Bears enter with a record of (4-5) and are coming off a 20-14 win over the Lions.  The Rams are (5-4) thus far and most recently lost on the road to the Steelers, 17-12.

In the Bears win over the Lions, the Bears were led by quarterback Mitchell Trubisky.  Trubisky completed 16 of 23 for 173 yds and 3 touchdowns.  The Bears trailed most of the first half, before scoring a touchdown with under 30 seconds to go till halftime.  The Bears led 7-6 heading into the locker rooms.  The Bears were out gained offensively 357 to 226 in the game.  The Bears did force 1 turnover.

In the Rams loss to the Steelers, the Rams were guided by the defense.  The offense didn't do much besides a Greg Zuerlein 30 yd field goal.  The Rams defense had a fumble return for a touchdown and also recorded a safety.  Dante Fowler Jr. had a 26 yd fumble return for a touchdown.  Jared Goff was 22 of 41 for 243 yds and 2 interceptions.  The Rams had 4 total turnovers in the loss.

Bears are 1-4 ATS in their last 5 games overall.

The Bears have won 6 of the last 10 meetings against the Rams, covering the spread in 7 of those games.  Both these teams were expected to make a run in the playoffs, but as it look right now neither team looks like that will happen.  Both are around .500 ball at the moment and aren't doing much to "wow" fans.  The Bears have been primarily led by their defense, where the Rams have been led by their offense.  The Bears are allowing the 4th fewest points to opposing teams, the Rams are allowing the 16th most.  I think the Bears offense will be able to do enough against the Rams defense and the Bears will be able to force a couple turnovers to stay in this game.  Final score prediction, Rams win but Bears cover, 24-20.