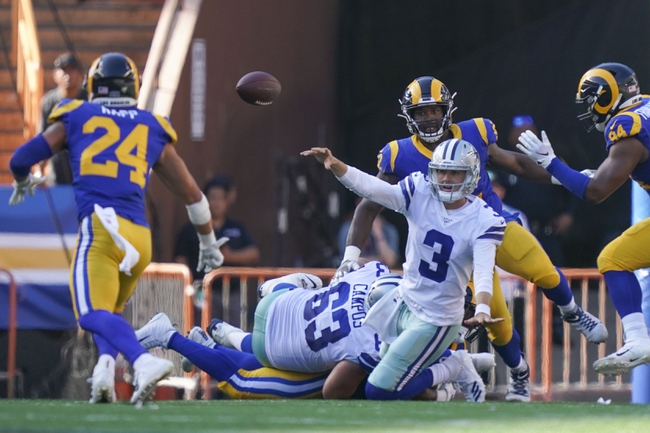 The Cincinnati Bengals travel west to pay a visit to the Los Angeles Rams.  The Bengals come into this game winless on the season with a record of 0-7. The Bengals are fresh off a 27-17 home loss to the Jaguars. The Rams snapped their 3 game losing streak on Sunday with a 37-10 win at the Falcons.  The Rams are currently 4-3 on the season.

In the loss to the Jaguars, Andy Dalton was 22/43 for 276 yds and 2 total touchdowns.  Dalton was picked off 3 times in the game.  Alex Erickson led the way with 8 receptions and 137 yds receiving.  The Bengals as a team only had 33 yds rushing. The Bengals hurt their chances in trying to come away with a win by allowing a pick 6 late in the 4th quarter.

Jared Goff was 22/37 for 268 yds and 2 touchdowns in the win over the Falcons.  Goff also added a rushing touchdown.  Robert Woods led the team in receiving yds with 80 on 5 receptions.  While Gurley was not very effective in the rushing department, he did have a receiving touchdown.  The Rams as a whole rushed for 90 yds on 36 carries. The Rams defense forced 3 Atlanta turnovers on the day.  The Rams out gained the Falcons 381 to 224.

The Bengals as an away underdog this season are 3-1 ATS.

The under is 5-0 when the Bengals are an underdog.

The Rams are 2-4 ATS as a favorite this season.

The under is 4-2 this season when the Rams are the favorite.

The Bengals have not been good this season and have been hit with the injury bug especially on the offensive side. This hurts their chances to be able to compete in this game.  The Bengals haven't had a rushing game this season, the Bengals are still waiting for Joe Mixon to get going.  However, some of his struggles have to do with the offensive line.  With this game being in London and due to the travel, I look for both teams to get off to sluggish starts.  I can't see the Bengals doing much on offense and the under has been profitable for both teams this year.  Final score prediction, Rams win and the total goes under 31-10.