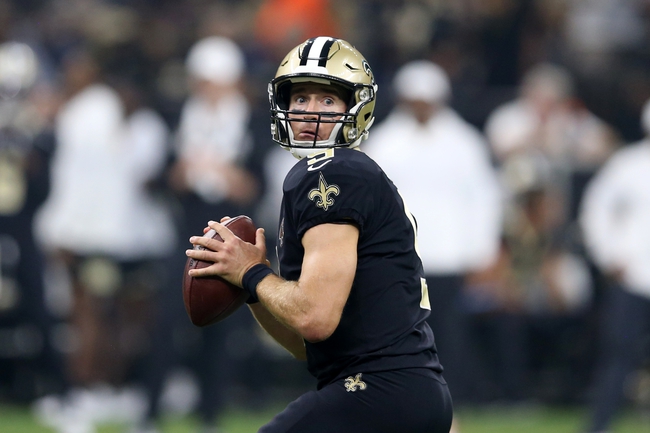 The New Orleans Saints and the Los Angeles Rams meet in a high-profile rematch of their NFC championship game from last season in week 2 NFL action from the Los Angeles Memorial Coliseum on Sunday afternoon.

The New Orleans Saints will look to build on a nail-biting 30-28 season-opening win over Houston in their last outing. Drew Brees threw for 370 yards, 2 touchdowns and an interception on 32 of 43 passing while Alvin Kamara had a team-high 97 rushing yards and Latavius Murray had 43 rushing yards and a touchdown. Michael Thomas led the Saints with 10 catches for 123 yards while Ted Ginn Jr. had 7 receptions for 101 yards. Alvin Kamara also added 7 catches for 72 yards while Tre’Quan Smith and Taysom Hill each had a touchdown reception. Defensively, Marcus Williams had an interception and the Saints combined for 6 sacks, including a pair of sacks from Trey Hendrickson. Vonn Bell and Alex Anzalone each had a team-high 5 solo tackles while Vonn Bell added a pair of assisted tackles.

The Los Angeles Rams will look to build on their season-opening 30-27 win over the Carolina Panthers in their last outing. Jared Goff threw for 186 yards, a touchdown and an interception on 23 of 39 passing while Todd Gurley II led the Rams in rushing with 97 yards on 14 carries and Malcolm Brown had 53 rushing yards and a pair of rushing touchdowns. Robert Woods led the Rams with 8 grabs for 70 yards while Cooper Kupp had 7 catches for 46 yards and Tyler Higbee had a touchdown grab for the Rams in the win. Defensively, Dante Fowler Jr had a pair of sacks and Clay Matthews added a sack of his own. Samson Ebukam had a forced fumble and a fumble recovery while Cory Littleton had a forced fumble, a fumble recovery, an interception and a team-high 8 solo tackles and 6 assisted tackles.

Los Angeles and a low line at home is tempting given what their offense is capable of. However, I’ve said before and I’ll say it all season, this year is the New Orleans Saints revenge tour after the way their season ended last year against these same Los Angeles Rams. You can imagine that the Saints had this game circled on their calendars as soon as the schedule came out in the offseason. The Rams got a solid character win on the road against Carolina, but New Orleans’ win over Houston might’ve been more impressive. Sure, the Saints probably underestimated the Texans and should’ve won that game by more if you ask some people, but the Saints came back to win on a last second field goal less than a minute after Houston rallied to take the lead on a two play drive in the last minute. I think the Saints have a ton of momentum and will be out for blood here, so I’ll take the points with New Orleans in a game I personally see the Saints winning outright.