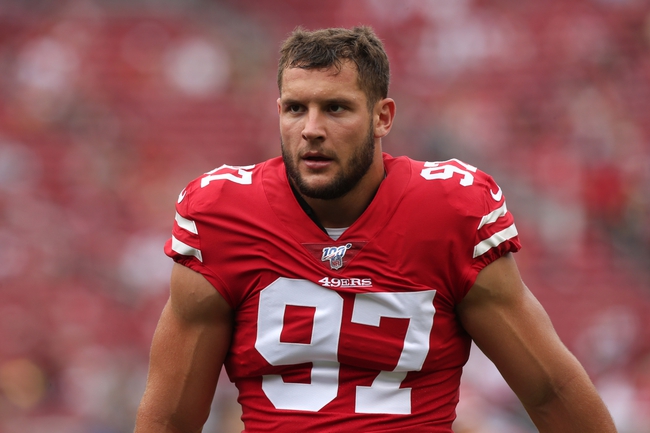 The San Francisco 49ers are set to visit Los Angeles Memorial Coliseum in Los Angeles, California for an NFC West clash against the Los Angeles Rams. The San Francisco 49ers come into this matchup with a 4-0 record, and they will be looking to continue their success after winning their recent home game against the Cleveland Browns, 31-3. QB Jimmy Garoppolo had an efficient game through the air for the 49ers as he connected on 20 of his 29 pass attempts for 181 yards and 2 TDs. RB Matt Breida had a big game for San Francisco as he contributed 114 rushing yards and 1 TD while also pitching in a receiving TD.

The San Francisco 49ers were very good on the defensive side of the ball against the Cleveland Browns as they held them to 3 points and a total of 180 yards of offense. Fred Warner led the way for the San Francisco defense with 6 tackles and a pass deflection. Nick Bosa was able to get into the Cleveland backfield a handful of times as he contributed 2 sacks and 2 TFL. The secondary had a productive game for the 49ers as Richard Sherman and K’Waun Williams hauled in interceptions for the defense.

The Los Angeles Rams come into this matchup with a 3-2 record, and they will be looking to rebound after dropping their recent road game against the Seattle Seahawks, 30-29. QB Jared Goff had a solid game through the air for the Rams as he threw for 395 yards, 1 TD, and 1 interception. TE Gerald Everett led the way for the Los Angeles playmakers with 7 receptions for 136 yards while Cooper Kupp racked up 117 yards and a TD on 9 catches.

The Los Angeles Rams struggled on the defensive side of the ball against the Seattle Seahawks as they allowed them to score 30 points and rack up a total of 429 yards of offense. LB Troy Reeder led the way for the Los Angeles defense with 13 tackles. Clay Matthews was able to record the lone sack for the Rams while Dante Fowler Jr. contributed 1.5 TFL. Nickell Robey-Coleman was able to force the lone turnover of the game with a forced fumble.

The San Francisco 49ers made themselves heard in their recent Monday Night Football game against the Cleveland Browns as they dominated them in all facets. The Los Angeles Rams are known for their high-powered offense, but the San Francisco defense will have something to say to that as their pass rush is one of the best in the NFL. The 49ers will look to find success on the ground with their abundance of running backs, but Garoppolo has some valuable targets in George Kittle and Marquise Goodwin which should keep the Rams defense honest. I think the 49ers at the very minimum should cover the spread, but I also like the ML on this game.