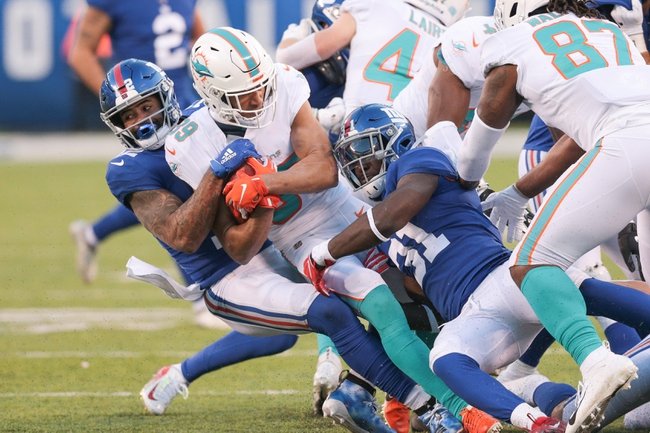 In the Bengals loss to the Patriots, Cincinnati was led on offense by running back Joe Mixon.  Mixon rushed for 136 yds on 25 carries.  Andy Dalton struggled in the game, completing 17 of 31 passes for just 151 yds, while throwing 1 touchdown and 4 interceptions.  Randy Bullock connected on 2 field goals, with a long of 48 yds.  The Bengals out gained the Patriots, 315 to 291.  The Bengals were unable to put together a ton of scoring drives, due to their inability to protect the ball.  The Bengals committed 5 turnovers, while forcing none.

In the Dolphins loss to the Giants, Miami was guided by quarterback Ryan Fitzpatrick.  Fitzpatrick completed 23 of 41 passes for 279 yds and 2 touchdowns.  DeVante Parker added 72 yds receiving on 4 receptions and 2 touchdowns.  The Dolphins were out gained, 412 to 384.  Miami forced 3 turnovers in the game, but were unable to use those as an advantage to get back into the game.

Bengals are 2-6 ATS in their last 8 games overall.

Dolphins are 7-3 ATS in their last 10 games overall.

The over is 4-1 in Dolphins last 5 games overall.

The under is 4-0-1 in the last 5 matchups between the two teams.  This is the Bengals final road game and this is their last chance to snag a road win during this season.  The Dolphins are 2-5 at home this year.  Cincinnati is a tricky 1 win team, as the Bengals have lost numerous games by just 1 possession.  The Bengals offense has been awful this year, averaging just over 15 points per game, that ranks dead last.  The Dolphins aren't much better, averaging over 17 per game, which ranks 29th.  However, the Bengals have a better defense, as the Dolphins have the worst scoring and 2nd worst rush defense in the league.  I'll side with Cincinnati to get their first road win, as the Bengals have been in more games than the Dolphins have.  Final score prediction, Bengals outright win, 24-20.