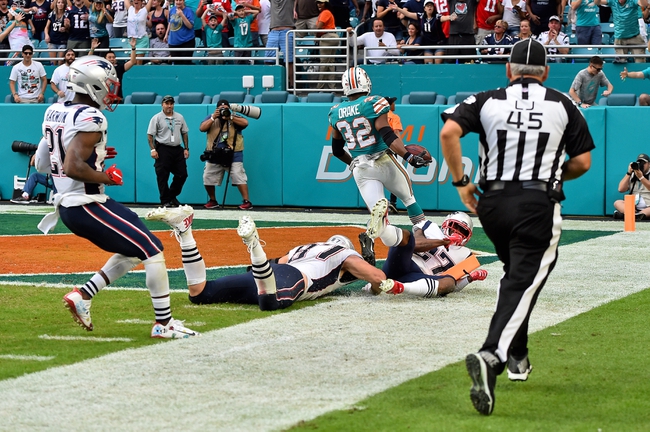 The Miami Dolphins have nowhere to go but up after losing to the Baltimore Ravens, 59-10. The Miami Dolphins have won six of their last nine home games. Ryan Fitzpatrick is completing 48.3 percent of his passes for 185 yards, one touchdown and one interception. Fitzpatrick has two or more touchdown passes in five of his last seven games. DeVante Parker and Mike Gesicki have combined for 106 receiving yards on five catches while Preston Williams has three receptions. The Miami Dolphins ground game is averaging 21 yards per contest, and Kenyan Drake leads the way with 12 yards on four carries. Defensively, Miami is allowing 59 points and 643 yards per game. Eric Rowe leads the Miami Dolphins with 11 tackles, Sam Eguavoen has 0.5 sacks and Jonathan Ledbetter has one tackle for loss.

The New England Patriots are 13-3 ATS in their last 16 games as a double-digit favorite. The Miami Dolphins have failed to cover seven of their last 11 games as a double-digit underdog. The home team has won nine of the last 10 meetings between the Patriots and Dolphins, which means New England has lost four of the last five games in Miami, including the game last December when the Dolphins won on a miracle play as 9.5-point underdogs. The Dolphins have completely gutted their roster to stock up on draft picks and salary cap space in hopes of being good in two or three years. The New England Patriots are covering machines when big favorites and just added Antonio Brown to the mix. I wouldn't be surprised if this is another beatdown and there's no logical reason to back the Fins here. However, I just can't process leaving this many points on the table in a NFL game. My brain has a hard time comprehending a number this big in the NFL. I have to take them if forced to pick this game, but you should probably avoid it.