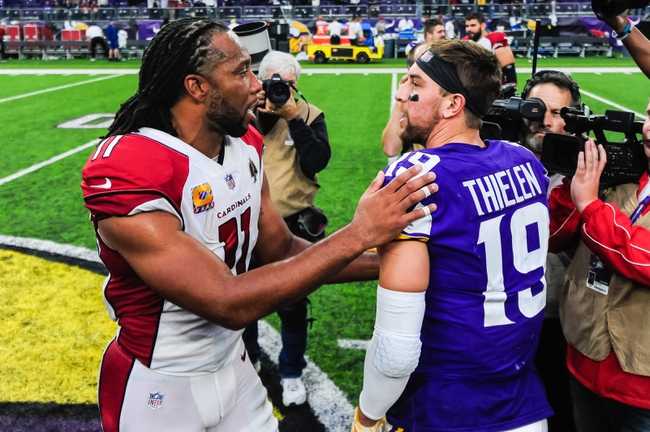 The Arizona Cardinals are 1-1 in preseason action after a 26-33 loss to the Oakland Raiders. Brett Hundley and Charles Kanoff combined for 204 passing yards and two touchdowns. Hundley led the Cardinals with 26 yards on three carries, while Andy Isabella had 59 receiving yards and one touchdown on one reception. Defensively, Zeke Turner led the Cardinals with seven tackles, Pete Robertson had one sack and Tyler Sigler had one tackle for loss. The Arizona Cardinals weren’t good defensively in their losing effort, but the main news this preseason has to be the play of rookie quarterback Kyler Murray. The first round pick of the 2019 NFL draft is just 9-15 passing for 56 yards, zero touchdowns and zero interceptions, and he’s looked uncomfortable most of those reps. Not time to hit the panic button yet, but eyebrows may start to raise over time if this play continues. The Arizona Cardinals have won four of their last six preseason games.

The Minnesota Vikings are 2-0 in preseason action after beating the Seattle Seahawks, 25-19. Kyle Sloter and Sean Mannion combined for 204 passing yards, two touchdowns and one interception. Mike Boone led the Vikings with 33 yards on 10 carries, while Laquon Treadwell had 47 receiving yards on four receptions. Defensively, Rashod Hill led the Vikings with four tackles, Ifeadi Odenigbo had 0.5 sacks and Jayron Kearse had three tackles for loss. The Minnesota Vikings have scored a combined 59 points and produced 48 first downs. It’s been highly impressive play for the Vikings out the gate, which includes five passing touchdowns. If only this will continue when the games actually count, the Vikings could truly be a Super Bowl dark horse. The Minnesota Vikings have won five of their last six preseason games.

Laying six points in a preseason game isn't ideal and I usually take a high number of free points right away for obvious reasons. However, the Arizona Cardinals haven't looked good though two games and don't have a reliable quarterback at this time you're confident can move the football. The Minnesota Vikings have been great offensively through two games and have multiple quarterbacks who have been lighting it up. Also, preseason or not, U.S. Bank Stadium is one of the tougher and louder places in the league to play as a visiting team. I don't want to lay this many points, but I almost have no choice.