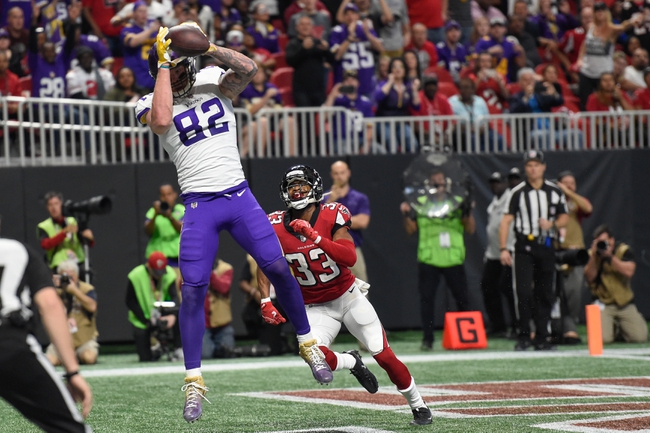 The Atlanta Falcons and the Minnesota Vikings meet in a week 1 NFL matchup from U.S. Bank Stadium on Sunday afternoon.

The Atlanta Falcons will look to start the season on a high note after saving their best for last, finally picking up their first win of the preseason in their last outing which was a 31-12 victory over Jacksonville. Danny Etling threw for 174 yards and a touchdown on 15 of 25 passing while also rushing for 67 yards. Tony Brooks-James led the Falcons with 137 rushing yards and a pair of touchdowns while Qadree Ellison had 51 rushing yards and a touchdown. Devin Gray led Atlanta’s receivers with 41 receiving yards while Jaeden Graham had a team-high 3 receptions and Christian Blake had the Falcons’ lone receiving score in the victory. Defensively, Jacob Tuioti-Mariner and Tre’ Crawford each had a sack while Ryan Neal led the Falcons with 6 tackles in the winning effort.

The Minnesota Vikings will look to bounce back after suffering their first loss of the preseason, coming in the form of a 27-23 loss to Buffalo last time out to finish the preseason at 3-1. Kyle Sloter threw for 163 yards and a touchdown that was cancelled out by an interception while Jake Browning threw for 46 yards and a pick on 8 of 10 passing. De’Angelo Henderson led the Vikes with 59 rushing yards and a touchdown while Brandon Dillon led Minnesota with 5 grabs for 48 yards and Cole Hikutini had 4 receptions for 45 yards. Ameer Abdullah’s lone reception out of the Vikings’ backfield went for a 15-yard touchdown as well in the win. Defensively, Karter Schult recorded a sack and forced fumble that Anree Saint-Amour recovered while Duke Thomas, Craig James and Nate Meadors tied for the team-high with 4 tackles in the victory.

I get Minnesota being favored because they’re at home and have been a tough out, both SU and ATS at home over the years. However, while it was only preseason, it’s hard for me to put faith in a Vikings team that blew a 23-6 lead with four minutes to go in their last game against the Bills. Atlanta has the edge at quarterback and on defense in my opinion, and that could end up being the difference here as I think the Falcons win this game outright, but I’ll take the points just to be safe.