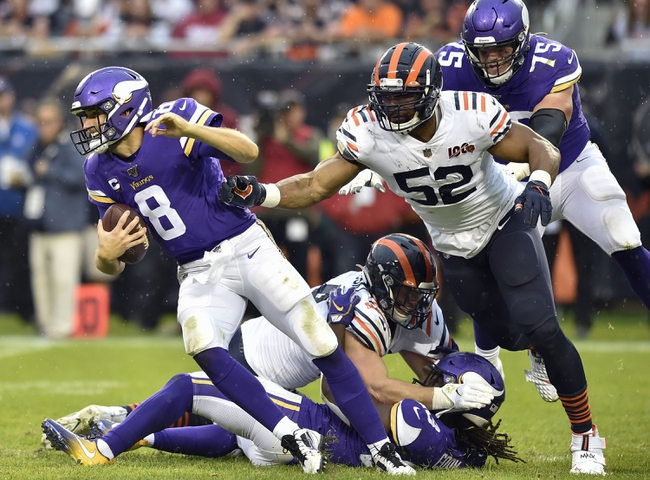 The Chicago Bears are on the road for their season finale at the Minnesota Vikings.  The Bears are (7-8), coming off a 26-3 loss to the Kansas City Chiefs.  The Vikings are (10-5), after falling at home to the Green Bay Packers, 23-10.

In the Bears loss to the Chiefs, Chicago was only able to snag a 46 yds field goal from Eddy Pineiro.  Mitchell Trubisky completed 18 of 34 passes for 157 yds.  The Bears were out gained by the Chiefs, 350 to 234.  Chicago struggled the whole game, only being able to enter the red zone once on the day.  There were no turnovers in the game.

In the Vikings loss to the Packers, Minnesota was led on offense by Kirk Cousins.  Cousins was 16 of 31 passing for 216 yds, while throwing 1 touchdown and 1 interception.  Stefon Diggs added 57 yds receiving on 3 receptions and a score.  The Vikings offense who was without Dalvin Cook, stumbled in his absence.  The Vikings were out gained 383 to 139 in the loss.  The Minnesota defense did force 3 turnovers in the loss.

Bears are 1-5 ATS in their last 6 games overall.

The under is 7-2 in Bears last 9 games overall.

The home team is 6-2 ATS in the last 8 matchups.  The Bears have one of the worse offense's in the league, scoring just over 17 points per game, that ranks 30th.  The Bears are also 29th in rushing yds, while being 26th in passing yds.  Defensively both teams are great.  Both teams are giving up less than 19 points per game.  The Bears will struggle to score and the Vikings offense will be held in check if Cook does not play.  Even if Cook plays, I don't see this being a high scoring game, I'll take the under.  Final score prediction, Vikings will win and the total goes under, 17-13.