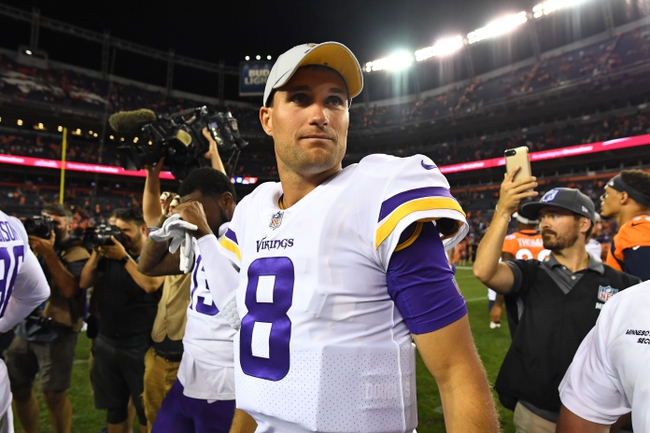 The Denver Broncos hit the road for a matchup with the Minnesota Vikings.  Broncos are (3-6) and coming off a bye week.  most recently the Broncos beat the Browns, 24-19.  The Vikings are (7-3), after beating the Cowboys, 28 to 24.

The Broncos got a win with rookie quarterback Brandon Allen under center against the Browns.  Allen was 12 of 20 for 193 yds, while throwing 2 touchdowns and no picks.  Philip Lindsay had 92 yds rushing on 9 carries and a score.  Noah Fant made teh most of his 3 receptions, totaling 1115 yds and a score.  The Broncos defense gave up 351 total yds, while holding the Browns to just 90 yds rushing.

In the road win over the Cowboys, Kirk Cousins completed 23 of 32 passes for 220 yds, 2 touchdowns, and no interceptions.  Dalvin Cook kept up with his good season, rushing for 97 yds on 26 carries and a score.  Kyle Rudolph only had 14 yds receiving, but 2 of those 4 receptions were touchdowns.  The Vikings stout defense allowed the Cowboys to gain 4443 yds of total offense.

Broncos are 4-1 ATS in their last 5 games overall.

The over is 4-1 in Vikings last 5 games overall.

The Broncos have won 3 games, but do having a winning record against the spread this year, 5-4. Minnesota is always a tough place for opposing teams to play outside of the division.  The Vikings are a  perfect 4-0 at home this year and will be trying to make it 5-0.  The Broncos beat an underperforming Browns team in their last game, but the Broncos offense just isn't where they need to be.  Broncos are averaging 16 points per contest, which ranks 28th in the league.  Flip it around, the Vikings have the 5th best defense in allowing the fewest points.  The Broncos haven't had the best of year thus far, however the defense has been fine.  Denver is allowing just below 19 points per contest.  This should be a game where we see mainly field goals.  Final score prediction, Vikings win and the total goes under, 24-13.