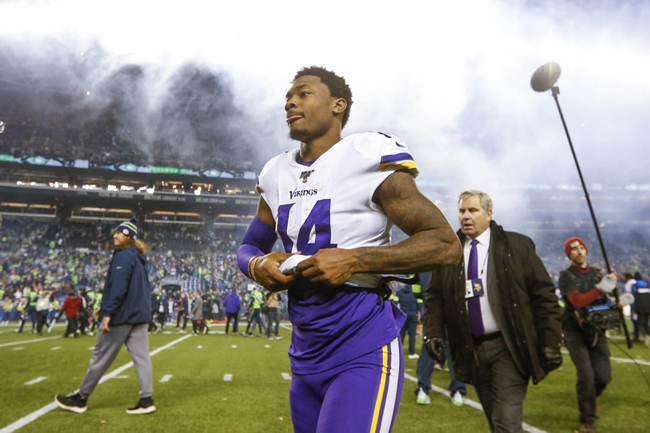 After a loss on Monday night, Minnesota will look to keep pace in the race to the postseason when the Vikings (8-4) host their NFC North foe the Detroit Lions at U.S. Bank Stadium on Sunday.

The big question in this game with the Vikings giving up such a huge number is will Matthew Stafford play? Stafford was ruled out before the week 10 matchup with Chicago with back and hip injuries and the Lions have lost four straight games in that time -- twice to Chicago, and once each to Dallas and Washington. It makes no sense for him to return this season now that Detroit has dropped to 3-8-1, but he has mentioned that he wants to play again this season.

NFL.com reported on Nov. 17 that Stafford could miss up to six weeks and this is week five since he sat with the injury, so a slightly faster than expected recovery period could see him ready to play on Sunday. Stafford was playing the best football of his career before the injury, averaging 320.6 yards per game with 19 touchdown passes through eight weeks and just five interceptions.

Since that time, Jeff Driskel has played three games, averaging 280.7 yards per game with four scores and four interceptions. After Driskel was ruled out for last week’s 24-20 loss to Chicago due to hamstring tightness, David Blough got the call and completed 22-of-38 passes for 280 yards and two touchdowns and one interception. Kenny Golladay had a big game, catching four balls for 158 yards and a 75-yard touchdown reception on Blough’s first completed pass of his career. Bo Scarbrough also had a big game on the ground, carrying the ball 21 times for 83 yards.

Scarbrough is the team’s leading rusher this year now that Kerryon Johnson has been placed on the IR and Scarbrough is averaging 4.5 yards per carry with 236 yards on 53 carries. Golladay is currently sixth in the NFL in receiving yards with 950 and he and teammate Marvin Jones Jr. are tied for the NFL lead with nine touchdown receptions.

While Detroit might be without Stafford once again, Minnesota might be without one of its star offensive weapons if Dalvin Cook can’t play. He injured his shoulder in Monday’s 37-30 loss to Seattle and didn’t return but he also said after the game that he should be able to play this week against the Lions. The training staff may have a different opinion, but at this point, it looks like Minnesota avoided a disaster there.

In that loss to the Seahawks, Minnesota quarterback Kirk Cousins completed 22-of-38 passes for 276 yards with two touchdowns and one interception. The ground game was stifled before Cook’s injury -- he carried nine times for 29 yards -- and shut down completely after the injury as that was the same time that Seattle blew the game open. Nine different Vikings caught passes, with Laquon Treadwell leading the way with just one catch, but it was a 58-yard catch for a touchdown. Alexander Mattison and Kyle Rudolph each caught four passes for 51 and 50 yards respectively.

Minnesota is a great offensive team, ranking seventh in the NFL scoring 26.6 points per game and it is led by Cousins who has thrown for 3,032 yards and 23 touchdowns with just four interceptions. Cook is fifth in the NFL with 1,046 rushing yards and his 12 rushing touchdowns are tied for the league lead. Cook is also second on the team with 490 receiving yards, behind only Stefon Diggs who has 50 receptions for 905 yards and five touchdowns.

Looking at which angle to play this game, a lot has to do with Stafford. If he plays, Detroit might be the pick. If he does, Minnesota might be a smart choice. But since that is unknown, the total is where to make the play, and this total seems low. These are two teams that just put up 72 combined points just seven weeks ago, and even though Stafford may not play, 42.5 points seems low. This is the same Minnesota team that put up 30 on Seattle

The only bad scenario that might come from playing the over is if Minnesota gets out to a quick lead and control the clock with Cook and the ground game. But Detroit has scored 23.3 points per game and has put up 20 or more points in nine of 12 games. The total is too low. Take the over.