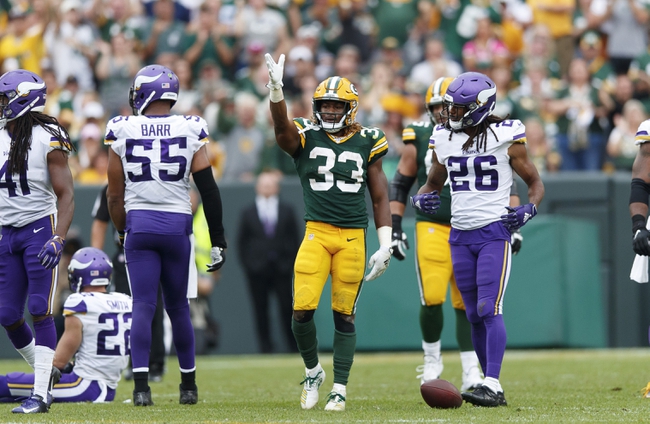 The Green Bay Packers are on the road for a Monday Night Football show down with the Minnesota Vikings, in a key NFC North game.  The Packers are (11-3), coming off a 21-13 win over the Chicago Bears.  The Vikings are (10-4), after upending the Los Angeles Chargers, 39-10.

In the Packers win over the Bears, Green Bay was led by receiver Davante Adams.  Adams registered 103 yds on 7 receptions, including a 29 yds touchdown reception.  Aaron Rodgers passed for 203 yds on 16 completions and 1 touchdown.  The Packers were smoked in total yds, 415 to 292.  The Packers were able to play solid defense when it mattered, forcing Chicago to commit 3 turnovers.  The Packers had zero turnovers in the win.

In the Vikings win over the Chargers, Minnesota was guided offensively by running back Mike Boone.  Boone rushed for 56 yds on 13 carries and 2 scores.  Dan Bailey connected on all 4 field goal attempts, with a long of 44 yds.  Kirk Cousins passed for 207 yds, while throwing 1 touchdown and 1 pick.  The Vikings were out gained by the Chargers, 345 to 344.  Minnesota had an incredible day on defense, forcing 7 turnovers.  Yes, 7 turnovers!.  The Vikings had 3 interceptions, 4 fumble recoveries, and a defensive touchdown as well.

Packers are 6-1 ATS vs a team with a winning record.

Packers are 5-2 ATS in their last 7 road games.

Vikings are 4-13 ATS vs a team with a winning record in their last 17 games.

The over is 5-1 in Vikings last 6 games overall.

The under is 5-0 in the last 5 matchups when played in Minnesota.  The Packers have won 3 in a row, while the Vikings have won 4 of their last 5.  This game has big implications on how the NFC North will unfold come playoff time.  The Packers have a perfect record in the NFC North thus far.  Minnesota is a perfect 6-0 at home this year.   Both defense's are in the top 10 in scoring defense.  This spread currently sits at Vikings 4.5 point favorites.  I think the spread is a little high, as this game has to much riding on the line.  I see this game coming down to a possession in the final minutes of the game.  I'll put stock in the Vikings in this home matchup because their defense has shown more than the Packers, but I'll take the Packers to cover.  Final score prediction, Vikings will win, but the Packers cover, 23-21.