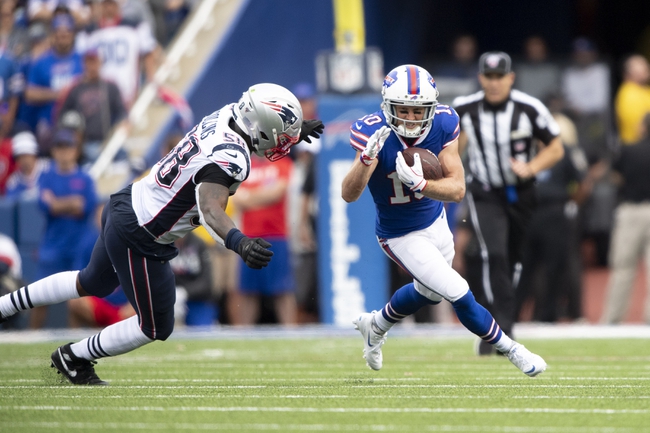 The Buffalo Bills travel to Foxboro, MA on Saturday for a game against the New England Patriots in a battle between the top two teams in the AFC East.  In their last game, the Bills were victorious against the Pittsburgh Steelers, winning by the score of 17-10.  Bills quarterback Josh Allen completed 13 of 25 passes for 139 yards and 1 touchdown against 1 interception.  Devin Singletary led the way for Buffalo on the ground as he rushed 21 times for 87 yards on the day.  Wide receiver John Brown was the leading receiver for the Bills as he caught 7 passes for 99 yards. The Bills gained a total of 261 yards in the game while allowing 229 total yards.

With the win, Buffalo improved to 10-4 on the season, which places them in 2nd place in the AFC East. Buffalo quarterback Josh Allen has now thrown for 2,876 yards and 18 touchdowns against 9 interceptions.  Devin Singletary has been the leader in rushing for the Bills as he has carried the ball 136 times for 729 yards and 2 touchdowns on the season.  John Brown has been the leader of the Buffalo receivers as he has caught 71 passes for 1,007 yards and 5 touchdowns on the year.  Buffalo enters Saturday’s game with 3 players this on their injury report as Taron Johnson is listed as questionable while Corey Liuget and Ty Nsekhe are listed as out.

The New England Patriots welcome the Buffalo Bills to town after winning their last game 34-13 against the Cincinnati Bengals.  Tom Brady completed 15 of 29 passes for 128 yards and 2 touchdowns.  Running back Sony Michel had 19 carries for 89 yards and was the Patriot’s leading rusher.  James White led New England in receiving as he caught 3 passes for 49 yards and a touchdown.  New England gained a total of 291 yards on offense while allowing 315 total yards.

With the win, the Patriots are now 11-3 this season which places them in 1st place in the AFC East.  Tom Brady has thrown for 3,565 yards and 21 touchdowns against 7 interceptions.  New England’s lead rusher is Sony Michel has rushed 208 times for 742 yards and 6 touchdowns on the year.  Julian Edelman has been New England’s lead receiver as he has caught 92 passes for 1,019 yards and 6 touchdowns on the season.  New England enters Sunday’s game with 5 players listed on their injury report Jonathan Jones, Shaq Mason and Julian Edelman are listed as questionable while Byron Cowart and Jason McCourty are listed as out.