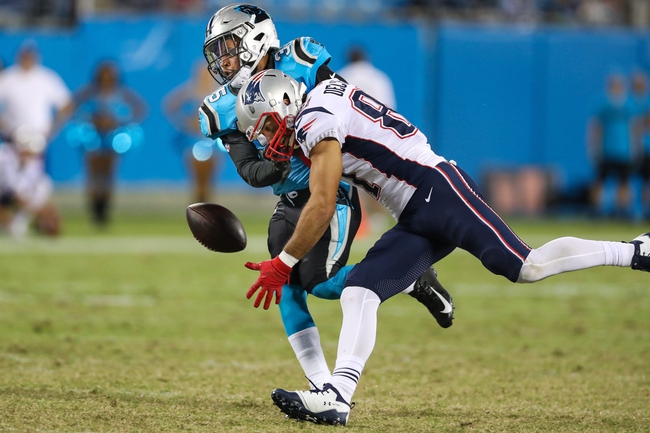 The Carolina Panthers fall to 1-1 in preseason play after a 14-27 loss to the Buffalo Bills. Taylor Heinicke and Will Grier combined for 153 passing yards, one touchdown and one interception. Jordan Scarlett led the Panthers with 35 yards on eight carries, while Reggie Bonnafon had 32 receiving yards on four receptions. Defensively, Jermaine Carter led the Panthers with seven tackles, Corn Elder had 0.5 sacks and Rashaan Gaulden had one tackle for loss. The Carolina Panthers averaged just 3.9 yards per play and were a rough 2-13 on third down attempts in the losing effort. After sitting key starters in both preseason games, you can expect the Panthers to open things up in this meeting, as nothing but backups play in the final exhibition contest. The Carolina Panthers have won four of their last six preseason games.

The New England Patriots are 2-0 in preseason action after a 22-17 win over the Tennessee Titans. Brian Hoyer and Jarrett Stidham combined for 240 passing yards, one touchdown and one interception. Damien Harris led the Patriots with 80 yards on 14 carries, while Jakobi Meyers had 82 receiving yards on six receptions. Defensively, Calvin Munson led the Patriots with eight tackles, Byron Cowart had one sack and Chase Winovich had two tackles for loss. The New England Patriots held the Titans to a scoreless second half and have allowed just 20 points in their first two preseason games overall. The Patriots also have 11 sacks and 12 tackles for loss through their first two games, so it’s the defense that’s certainly flexing the muscle in exhibition play. The New England Patriots have won five of their last six preseason games.

I never look to lay big chalk in a preseason game, so once you start getting about three points, I'm usually leaning toward the underdog simply due to the preseason being a coin flip most of the time. The New England Patriots also have a history of limiting their starters, even if its the third preseason game. With all that said, the Panthers haven't been all that impressive through two games and the lack of offensive weapons scares me against some of the better teams in the league. The New England Patriots have cruised in both exhibitions and have now won five of their last six tries. I'll take the Pats by a touchdown.