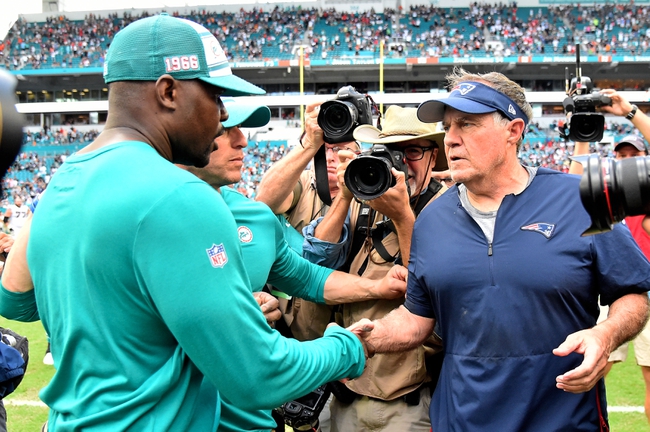 The Miami Dolphins are on the road for their final game, with a date with the New England Patriots.  The Dolphins are (4-11), coming off a 38-35 OT win over the Cincinnati Bengals.  The Patriots are (12-3), after getting past the Buffalo Bills, 24-17.

In the Dolphins win over the Bengals, Miami was led on offense by Ryan Fitzpatrick.  Fitzpatrick completed 31 of 52 passes for 419 yds, while throwing 4 touchdowns and 1 pick.  DeVante Parker contributed 5 receptions for 111 yds and 1 touchdown.  The Dolphins out gained the bengals in yds in an offensive minded game, 502 to 430.  The Dolphins had a comfortable lead with 7 minutes to go, but the Bengals scored 23 straight points in the final 6:11 of the 4th quarter to send the game to OT.

In the Patriots win over the Bills, New England was carried on offense by Tom Brady.  Brady threw for 271 yds on 26 completions and a touchdown.  Nick Folk added 3 field goals, with a long of 51 yds.  The Patriots put up over 400 yds of offense, out gaining the Bills, 414 to 268.  New England finished the game with 143 yds rushing in the win.

Dolphins are 8-3 ATS in their last 11 games overall.

The over is 5-1 in Dolphins last 6 games as an underdog.

Patriots are 22-5 ATS vs a team with a losing record in their last 27 games.

Patriots are 1-3-1 ATS in their last 5 games as the favorite.

The Dolphins are 0-7 ATS in their last 7 matchups when playing in New England.  The Dolphins have actually looked solid on offense recently, scoring 24 or more points in 3 of their last 5 games.  The Dolphins got blown out by the Patriots earlier in the year, falling 43-0.  The Patriots are allowing the fewest points per game, allowing under 14 points per game.  This is the Dolphins final game of the year and with a young team, there are Miami players that are trying to pay for a spot on next year's team.  The Dolphins while having a losing record, have been one of the hardest playing teams in the league.  The effort will be there in this one, as Miami will do enough to cover.  However, the Patriots will still win by multiple scores, as the Dolphins have the worse scoring defense int he league.   Final score prediction, Patriots will win and the Dolphins cover, 30-16.