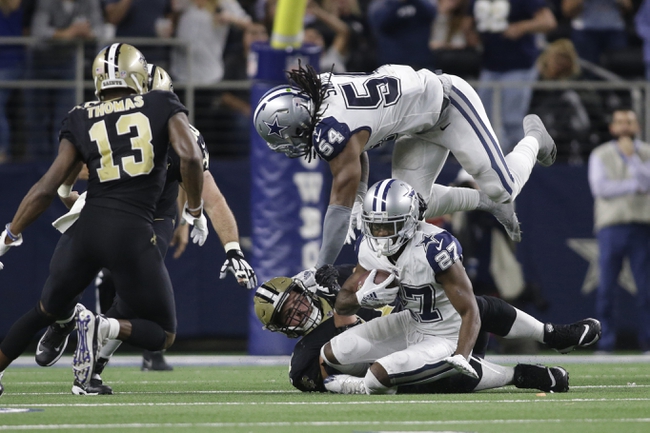 The Dallas Cowboys and the New Orleans Saints meet in week 4’s installment of Sunday Night Football from the Mercedes-Benz Superdome in NFL action.

The Dallas Cowboys will look to build on their 3-0 start to the season after picking up a 31-6 win over Miami in their last outing. Dak Prescott has thrown for 920 yards, 9 touchdowns and 2 interceptions on 74.5% passing while Ezekiel Elliott has rushed for 289 yards and 2 touchdowns. Tony Pollard also has 149 rushing yards for Dallas while Amari Cooper leads Dallas in receiving with 238 receiving yards and 4 touchdowns with a team-high 16 receptions. Michael Gallup is 2nd in receiving with 13 grabs for 226 yards while Randall Cobb and Devin Smith are each in the 100+-yard receiving category this season. Defensively, Jaylon Smith leads the Cowboys with 27 total tackles including 20 solo tackles, while DeMarcus Lawrence has a team-high 1.5 sacks. As a team, Dallas is averaging 481.3 yards of total offense and 32.3 points per game while allowing 336 yards of total defense and 14.7 points per game this season.

The New Orleans Saints will look to pick up some momentum after a 33-27 win over Seattle on the road in their last outing, improving to 2-1 on the year as a result. Teddy Bridgewater threw for 177 yards and 2 touchdowns on 19 of 27 passing while Alvin Kamara remains New Orleans’ leader in rushing with 211 rushing yards this season. Michael Thomas leads New Orleans with 25 receptions for 266 yards while Kamara has 179 receiving yards and Ted Ginn Jr. has 116 receiving yards as the 3rd 100-yard receiver for the Saints this year. Marshon Lattimore and Vonn Bell are tied for the team-high with 21 total tackles while Trey Hendrickson has 3 sacks and Cameron Jordan has a pair of sacks. As a team, New Orleans is averaging 339.7 yards of total offense and 24 points per game while allowing 436.3 yards of total defense and 27.3 points per game against this season.

Dallas is off to a strong start on the surface, and while you can’t fault the Cowboys as they didn’t make their own schedule, the fact is that Dallas hasn’t had the toughest first three weeks of the season, with their 3 opponents posting a combined record of 1-8 with a combined 142 points for and 321 points against this season. Yikes. I counted New Orleans out against the Seahawks, and boy did the Saints prove me wrong, marching into Seattle and beating up on the Seahawks for most of that game. I just think that New Orleans will be ready and raring to get some revenge after the Cowboys beat the Saints in their own building last season, and with the crowd behind them I can’t see Dallas passing their first real test of the season, so I’ll take New Orleans and the points in a game I see New Orleans winning outright.