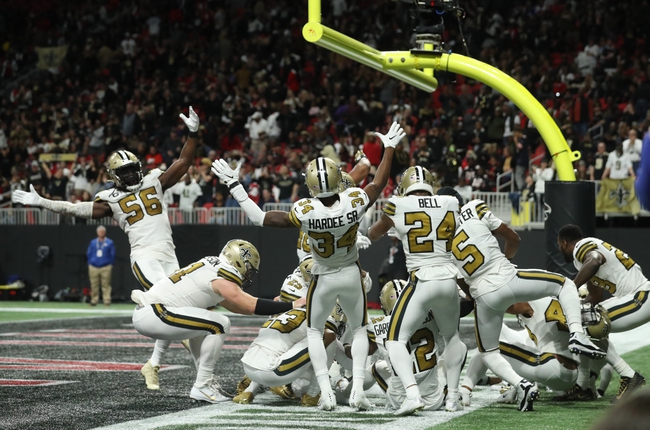 The game of the week in the NFL this week will take place in New Orleans when the Saints (10-2) welcome the San Francisco 49ers (10-2) into the Mercedes-Benz Superdome in an NFC battle with major playoff implications. Even though the Saints clinched a playoff spot last week, the Saints will want to continue to push in order to keep home-field advantage throughout the playoffs.

The Saints entered last week easily atop the NFC South, but after Baltimore edged the 49ers on Sunday, New Orleans suddenly found itself atop the NFC with four games to play. At the same time, San Francisco went from the No. 1 seed in the NFC down to a wild-card spot and the possibility of heading out on the road throughout the postseason. A San Francisco win combined with a Seattle loss at the Rams would put the 49ers right back on top of the NFC, though.

But will that happen? The 49ers have looked anything but the unstoppable force they appeared to be early in the season, going 2-2 in their last four games. Granted, the two losses were an overtime defeat to Seattle and a 3-point thriller against Baltimore. But San Francisco also won twice against Arizona over the past five weeks and allowed 25 and 26 points to the Cardinals, a team that ranks just 20th in the NFL in scoring. The 49ers were dominant two weeks ago, though, with a 37-8 win over Green Bay.

So it hasn’t been all bad for San Francisco, but it creates doubt, especially in a game such as this one in which the 49ers are playing yet another quality team. It’s even more interesting when realizing that as San Francisco was rolling to its 8-0 record, it only played two teams that currently have winning records, and those two teams (Pittsburgh and the Los Angeles Rams) only have 7-5 records. The 49ers were winning, but they weren’t playing top-notch competition.

That’s not to say that the 49ers aren’t good. That’s far from fact. Jimmy Garappolo has been one of the league’s most accurate passers completing 69.0 percent of his passes in San Francisco’s offense that looks to run first more often than not. His interception total of 10 is high and ranks among the bottom third of the NFL, but a defense like the 49ers can withstand turnovers better than most. That defense allows the least yards per game and the second-to-least points this season.

Matt Breida, Raheem Mostert, and Tevin Coleman share the ball-carrying duties with each rushing for between 454 and 542 yards. Breida is listed as questionable for this week with an ankle injury. Tight end George Kittle is Garappolo’s favorite target, catching 67 passes for 687 yards and three touchdowns. On defense, Arik Armstead and Nick Bosa cause all sorts of trouble for opposing quarterbacks. Armstead ranks in a tie for sixth in the NFL with 10 sacks and Bosa has eight.

New Orleans has been impressive for just about all season, except for a pair of losses by almost the exact same score. The Saints lost to the Rams, 27-9, in a week two game in which quarterback Drew Brees was injured in the first quarter, then ran off six straight before falling at home to the Falcons, 26-9, in a week 10 game that made Atlanta look like the best defensive team in the league. Otherwise, New Orleans has looked every bit one of the NFL’s best teams with wins over Houston, Seattle, Dallas, while enjoying a surprisingly weak NFC South to pad the record.

The Saints were able to avenge their loss to Atlanta last week by a 26-18 score in a game that Brees only needed to complete 18-of-30 passes for 184 yards and a touchdown to win. Alvin Kamara carried the ball 11 times for 61 yards and Jared Cook caught three passes for 85 yards in the win. Michael Thomas was held quiet with six catches but only for 48 yards. His longest reception went for just 14 yards.

But on the season, the Saints rank ninth in the NFL in points scored at 24.8 per game led by Brees, who missed seven games due to injury but has completed an astounding 73.8 percent of his passes for 1,791 yards and 12 touchdowns with only four interceptions. Brees’ favorite target Michael Thomas is leading the NFL in receptions (110) and yards (1,290), while Alvin Kamara has a 4.7 yards per carry average with 125 rushes for 587 yards. Kamara also has 64 catches for 444 yards. Also watch out for Cameron Jordan on defense, who ranks second in the NFL with 13.5 sacks.

These are two of the best teams in the NFL and either could win. That being said, points will be scored. The 49ers score 29.1 points per game and the Saints score 24.8 points per game. Even though both defenses are good, the teams will find the end zone. The total seems a bit low. How about a 24-21 Saints lead with 42 seconds to go and Garappolo takes his team down to the 24-yard line for a 41-yard Robbie Gould field goal to tie it up at 24 as time expires? Overtime? At 24-24, it’s a win for us. Go with the over.