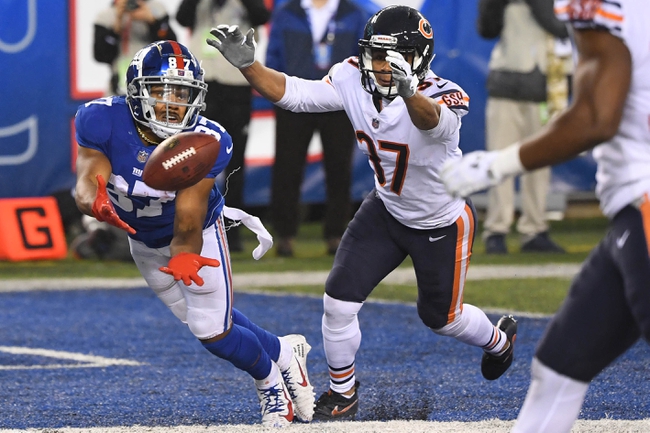 The Chicago Bears fell apart in the second half and lost to the Carolina Panthers, 13-23. Chase Daniel and Tyler Bray combined for 205 passing yards, zero touchdowns and zero interceptions. Kerrith Whyte Jr. led the Bears with 35 yards on six carries, while Ian Bunting had 77 receiving yards on three receptions. Defensively, Josh Woods led the Bears with six tackles, Nick Kwiatkoski had one sack and Kevin Pierre-Louis had one tackle for loss. The Chicago Bears flexed their muscle defensively with six tackles for loss and two forced turnovers, but the second half offense didn’t produce much. The good news is the Bears played majority of their backups, so things could be different with the starters likely getting some reps in this contest. The Chicago Bears have lost five of their last seven preseason games.

The New York Giants are coming off a 31-22 win over the New York Jets, a game in which they scored at least seven points in all four quarters. Alex Tanney and Kyle Lauletta combined for 306 passing yards and two touchdowns. Wayne Gallman led the Giants with 13 yards on five carries, while TJ Jones had 72 receiving yards and one touchdown on six receptions. Defensively, Jonathan Anderson led the Giants with five tackles, Terrence Fede had one sack and Tae Davis had one tackle for loss. The New York Giants watched all of their quarterbacks feast on the Jets defense, as even rookie Daniel Jones completed all five of his passes and had a touchdown pass. It’s just one meaningless game, but Giants fans have to be a little more optimistic about the upcoming season than they were before the preseason started. The New York Giants have won five of their last seven preseason games.

Whether the starters get more reps for the Chicago Bears or not, this team didn't look good at all in the second half of their opener, and that falls on the backups who are going to play in this contest once again. The New York Giants got solid play from their backup quarterbacks and pretty much lit the Jets secondary on fire throughout the game. Things can change on a dime in preseason action, but in a near pick em game, give me the team that looked sharp last week over the team that had no answers.