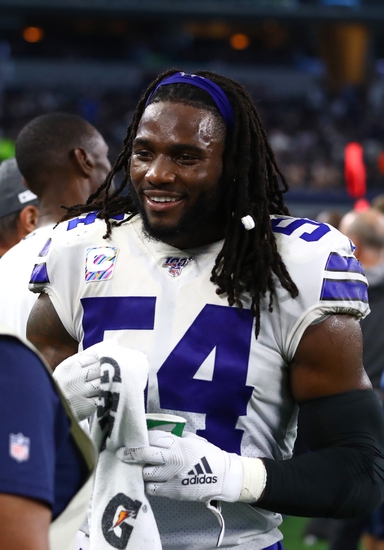 The Dallas Cowboys (4-3) will look to keep its slight grip on first place in the NFC East when it travels to East Rutherford, N.J. to take on the New York Giants (2-6) in Monday Night Football action. This is a rematch from the season opener for both teams in which the Cowboys had little trouble dispatching of the Giants 35-17, and the only differences in this one are that the game is not in Texas and Eli Manning won’t be starting for the Giants.

Long-time Giants starting quarterback Manning lasted just one more start after the Cowboys loss to open the season before he was benched in favor of Daniel Jones, who won his first two games as a starter against Tampa Bay and Washington before dropping the next four in a row. Jones’ statistics are mixed, completing 62.5 percent of passes for 1,466 yards in his six starts, but the seven interceptions against 10 touchdowns won’t be enough in the long term. Giants running back Saquon Barkley has missed time with a sprained ankle but is managing a respectable 74.6 yards rushing per game. That is well below the spectacular normally expected of him, however.

The Giants’ problem has been on defense. The offense has put together double-digit scoring in all eight games and has scored three or more touchdowns on four different occasions. But New York’s defense ranks 28th in the NFL in yards allowed and 27th in points allowed. Compare that to Dallas and its top-ranked offense in yards per game that is also sixth in the NFL in points per game and it’s tough to find an angle that supports the Giants covering this relatively small line.

Despite three narrow Dallas defeats against great teams like New Orleans and Green Bay (and an odd loss to the Jets), the Cowboys have looked solid in 2019. Big wins over the Giants, Washington, and Miami before the three losses, and a big 37-10 win over Philadelphia last week shows the overall strength of that Dallas offense.

Dak Prescott continues to roll, completing more than 70 percent of his passes for 2,123 yards and 12 touchdowns, although the seven interceptions could be better. Prescott is finding Amari Cooper the most with the receiver averaging 88.7 yards per game in receptions with five touchdowns on the year. Ezekiel Elliott brings the balance on the ground with 602 yards rushing and six touchdowns on the ground.

As noted before, it’s tough to find an angle that backs a bet on the Giants on Monday night. Maybe that Jones is getting better and is getting set to take over a game? Unlikely. How about that the game will be at MetLife Stadium, the same place where the Jets knocked off Dallas just three weeks ago? Maybe. But that’s a stretch.

Just don’t think about it that hard. This is the best offense in the NFL in yards per game against one of the worst defenses in the same category. This should be a track meet. Enjoy a win Monday night with the Cowboys minus the points.