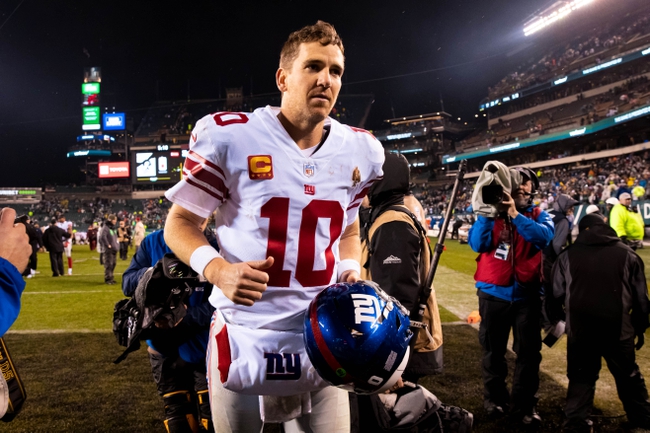 In the Dolphins loss to the Jets, Miami was left out of the end zone.  The Dolphins have kicker Jason Sanders to thank for keeping Miami in the game.  Sanders connected on 7 of 8 field goal attempts, with a long of 53 yds.  Sanders was responsible for all the points.  The Dolphins were out gained by the Jets, 374 to 362.  The inability to find the end zone hurt the Dolphins, as quite a few drives finished deep in Jets territory, as Sanders had 4 field goals from 31 yds or less.

In the Giants loss to the Eagles, New York was guided by Eli Manning.  Manning was given the start due to an injured Daniel Jones, Manning did not disappoint in the 1st half.  Manning helped lead the Giants to a halftime lead of 17-3, thanks to 2 passing touchdowns to Darius Slayton.  Slayton had 5 receptions for 154 yds receiving, and the two scores. Manning finished 15 of 30 for 203 yds and 2 touchdowns.  The Giants were out gained 418 to 22 in the loss.  The Giants were held without a point in the 2nd half and OT, as the Eagles scored 23 unanswered points.

Dolphins are 4-1 ATS in their last 5 road games.

Dolphins are 7-2 ATS in their last 9 games overall.

The over is 4-1 in Dolphins last 5 road games when facing a team with a losing record.

Giants are 2-6 ATS in their last 8 games overall.

The over is 4-1 in Giants last 5 games overall.

After failing to score in the 2nd half and put the game away, the Giants have now lost 9 in a row.  The Dolphins are 3-3 in their last 6 games.  Both defense's have struggled this year, as both have a scoring defense that ranks 28th or worse.  The Dolphins have the worse defense, giving up nearly 31 points per game.  This should be a high scoring game as each defense struggles in different aspects.  Dolphins should be able to pass at will and Giants running back Saquon Barkley should have a day.  The Dolphins rank 31st in rush defense.  Final score prediction, Giants win and the total goes over, 27-23.