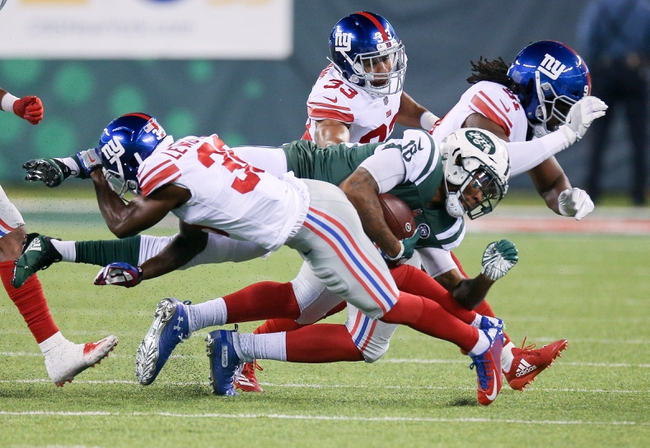 The New York Jets will be an interesting preseason team to watch given that they have a new coaching staff led by Adam Gase, and a young quarterback in Sam Darnold who is expected to take that next step. The Jets fanbase needs to see some positives rather quickly to help put their nerves at ease. We also have a chance to see Le'Veon Bell for the first time since 2017 when he rushed for nearly 1,300 yards and nine touchdowns with the Pittsburgh Steelers. Position battles worth watching are backup running back with Ty Montgomery, Elijah McGuire and Trenton Cannon fighting for carries. Defensive end is also going to be a battle, as young players Frankie Luvu, Tarell Basham and Jachai Polite have a chance to earn some playing time on the outside. The New York Jets have lost five of their last seven preseason games.

The New York Giants have to show their fanbase something this preseason, as trading away Odell Beckham and keeping Eli Manning around doesn’t move the needle at all. There’s going to be a lot of eyes on rookie quarterback Daniel Jones, who was a controversial first round pick and was selected over Dwayne Haskins. Jones has to show something or the Giants front office will continue to get grilled. The offensive line is also worth noting, mainly a center battle between Jon Halapio and Spencer Pulley, as one of those guys needs to separate himself from the pack. Defensively, rookie Dexter Lawrence has a chance to earn a starting role as nose tackle, while Oshane Ximines and Deandre Baker can earn meaningful minutes this season due to a thin linebacking corps. The New York Giants have split their last eight preseason games.

The New York Jets have to play their starters quite a bit this preseason as they adjust to a new coaching staff, and they have some decent quarterback depth with Trevor Siemian being a former starter and Davis Webb being a highly effective QB at Cal. The New York Giants have a lot of new faces on the offensive side and I'm not sure what to expect from Daniel Jones. I'm not a big believer in Gase and don't think the Jets are going to be this big bad surprise team this year, but they have capable Qb depth, which is often key in meaningless preseason games. I'll lay the small chalk with the New York Jets.