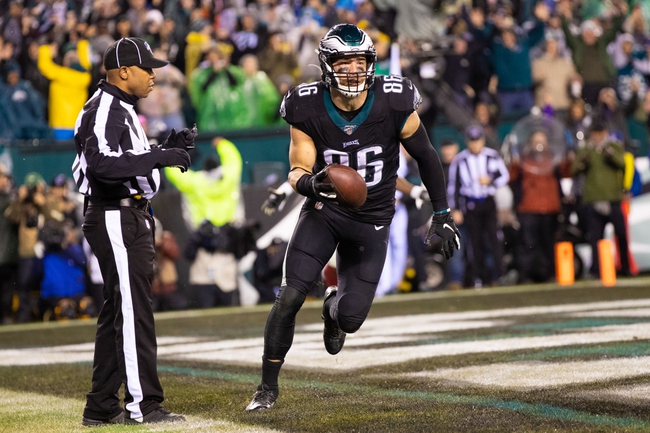 The Philadelphia Eagles head to East Rutherford, New Jersey on Sunday for a game against their division rival, the New York Giants.  The Eagles enter Sunday’s game after winning their last game by the score of 17-9 against the Dallas Cowboys.  In the game against Dallas, Philadelphia quarterback Carson Wentz completed 31 of 40 passes for 319 yards and 1 touchdown.  Running back Miles Sanders led the Eagles on the ground with 20 carries for 79 yards and a touchdown.  Tight end Dallas Goedert led the Eagles in receiving as he caught 9 passes for 91 yards and a touchdown in the game.  The Eagles offense gained a total of 431 yards against the Cowboys while allowing 311 yards.

After the win, the Eagles are now 8-7 on the season which places them in 1st place in the NFC East and with the ability to clinch the division with a win on Sunday.  Quarterback Carson Wentz has thrown for 3,750 yards and 26 touchdowns this season against 7 interceptions on the year.  Miles Sanders has been the Eagles leading rusher as he as carried the ball 170 times for 766 yards and 3 touchdowns on the season.  The lead receiver for Philadelphia is tight end Zach Ertz who has caught 88 passes for 916 yards and 6 touchdowns on the year.  Philadelphia enters Sunday’s game pretty banged up as they have 5 players listed on their injury report as Jalen Mills, Nelson Agholor, Lane Johnson and Jordan Howard are listed as questionable while Ronald Darby is listed as out.

The New York Giants welcome the Philadelphia Eagles to town on Sunday, looking to end the year on a high note and play spoiler against their longtime division rivals.  In their last game, the Giants defeated the Washington Redskins by the score of 41-35 in overtime.  Quarterback Daniel Jones returned from injury and had his best game of the season as he completed 28 of 42 passes for 352 yards and 5 touchdowns.  Saquon Barkley led the Giants rushing game as he carried the ball 22 times for 189 yards and a touchdown.  Golden Tate was the leading receiver in the game for New York as he caught 7 passes for 86 yards.  The Giants offense gained a total of 552 yards in the game while their defense allowed 361 yards against the Redskins.

With the win against the Redskins, the Giants are now 4-11 on the season which places them in 3rd place in the NFC East.  Giants quarterback Daniel Jones has thrown for 2,726 yards on the year to go along with 23 touchdowns against 11 interceptions.  Saquon Barkley has rushed 200 times for 911 yards and 5 touchdowns on the season.  Darius Slayton has been the leading receiver on the year for the Giants as he had caught 44 passes for 690 yards and 8 touchdowns.  The Giants enter their final game of the season with 4 players listed on their injury report as Alec Ogletree, Mike Remmers, Sam Beal and Rhett Ellison are all listed as questionable.