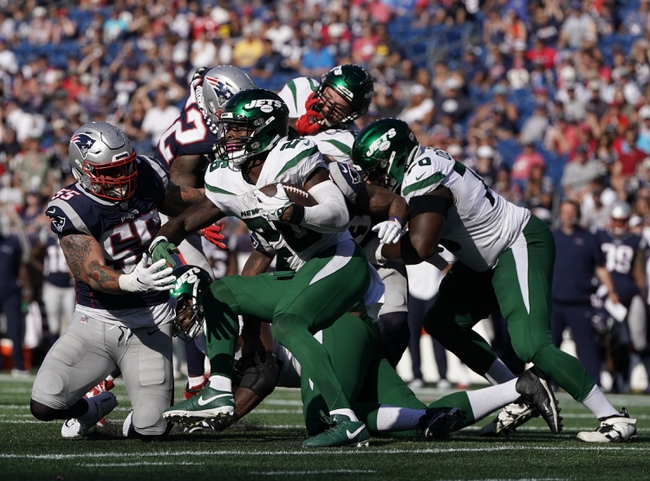 The New England Patriots go on the road to face the New York Jets in a nationally televised game on Monday night.  The Patriots head into New York with a perfect 6-0 record thus far. The Patriots are coming off a victory over the Giants 35-14 last Thursday. The Jets enter this matchup with a 1-4 record.  The Jets are coming off a home victory that saw them squeak out a 24-22 win over the Cowboys. This will be the second meeting between the two teams this season.

Tom Brady threw for over 330 yds on 31 completions and no passing touchdowns.  However, he did have two rushing touchdowns. Julian Edelman led the Patriots in receiving with 113 yds on 9 receptions.  The Patriots defense forced 4 turnovers en route to their victory. On the season Brady is 149/228 for 1,743 yds, while throwing 10 touchdowns.

In the win against the Cowboys, quarterback Sam Darnold was 23/32 for 338 yds passing and 2 touchdowns.  The Jets saw Robby Anderson get back to his old self from 2 years ago. He had 5 receptions for 125 yds and a touchdown, with a long of 92 yds.  Jamison Crowder totaled 98 yds receiving. Le’Veon Bell added 50 yds rushing and 1 score.

The Patriots are 4-2 this season ATS.

The Patriots are 3-0 on the road this season and already have one home win over the Jets this season. The Patriots have extra rest going into this game compared to the Jets, since the Patriots played the Thursday night game of week 6. The Jets don’t have a stellar offense and the patriots have done well ATS with extra rest in recent years. The Jets have also struggled ATS as an underdog. Final score prediction, Patriots win and cover 28-14.