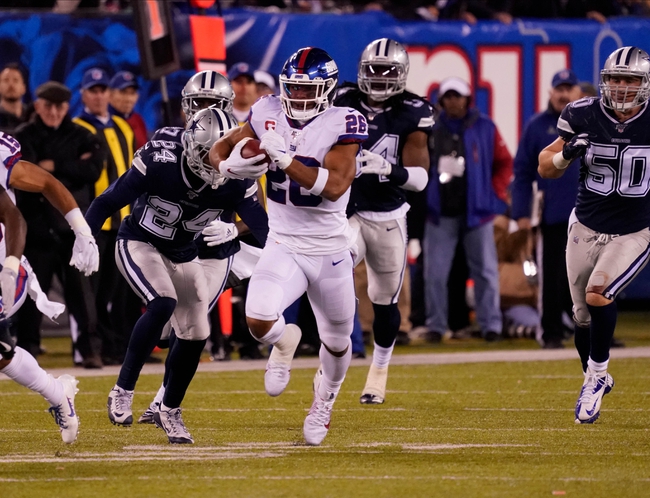 The battle of New York -- in New Jersey -- will take place on Sunday when two of the worst teams in the NFL face off at MetLife Stadium in East Rutherford. The Jets (1-7) will be the designated home team Sunday afternoon in their games against the Giants (2-7). The Jets haven’t won since Oct. 13 and the Giants haven’t seen a win since September.

It was just days after the Jets’ first and only win of the season -- a 24-22 victory over Dallas -- when quarterback Sam Darnold was quoted as saying “Once all the guys are back together, I think we’re unstoppable as an offense -- or we can be. It’s just up to us and how we execute. It’s really up to us how many points we score, I think.” Well, apparently the Jets haven’t wanted to score very much because in the three games since that comment, Darnold’s team is 0-3 and is averaging just 11 points per game.

The Jets had an excuse early on when Darnold was injured, but they really don’t have any excuses at this point, especially for a team that he described as being “...up to us how many points we score.” The Jets have gained the least amount of yards in the NFL, are the worst passing team in the league, and are the least scoring offense averaging just 12.0 points per game. Combine that with a defense that ranks third to last in the AFC allowing 26.4 points per game, and it’s no surprise that the Jets are only 1-7.

Darnold is the team’s leading passer despite missing three games with mononucleosis. He has completed 63.2 percent of his passes for 1,077 yards and six touchdowns but has been picked off nine times for an average of nearly two per game. Le’Veon Bell is the team’s leading rusher but is averaging just 51.2 yards per game and has but a lone touchdown on the season. Bell is listed as questionable for the game with a knee injury, and the Jets will also be without wide receiver Josh Bellamy and cornerback Trumaine Johnson who were placed in the IR this week.

What could help a team in such dire straits? A game with the Giants, a team with a worse defense and only slightly better offense. When looking at the Giants defense, it is amazing they have two wins this season. Look at it this way: The Giants have allowed at least 27 points to every opponent they have faced this year except one. That one was a 24-3 win over Washington. But 27 or more points to every other opponent? It’s hard to fathom.

Daniel Jones is learning on the job for the Giants at quarterback, looking strong at times and showing athleticism in his ability to run the ball. He has passed for 1,676 yards and 11 touchdowns, but he has also tossed eight picks. Saquon Barkley is a proven star but has an unproven line to block for him, so Barkley has been limited for just 401 yards in his six games played with two touchdowns.

Both teams are nearly 50-50 against the spread and with the total, but one stat stands out among all the rest when looking at these two teams, who are both simply bad on all accounts. That stat is that when the Giants are road underdogs, which they are considered in this game, the over has hit all four times. And it hasn’t just hit all four times, but it has hit by an average of nearly 10 points per game. It makes sense -- two awful defenses and at least one offense that is “unstoppable” at least in one quarterback’s mind. Take the over and watch these horrible defenses stumble in New Jersey.