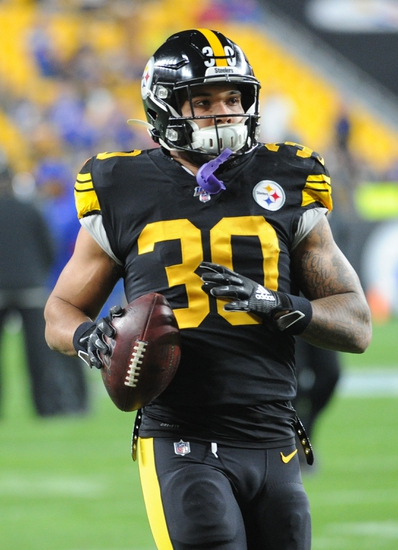 The Pittsburgh Steelers travel to East Rutherford, New Jersey on Sunday for a game against the New York Jets in a matchup of two teams from the AFC.  In their last game, the Steelers were defeated by the Buffalo Bills, by the score of 17-10.  Steelers quarterback Delvin Hodges got the start under center and completed 23 of 38 passes for 202 yards and 1 touchdown against 4 interceptions.  Running back James Conner led the way for Pittsburgh on the ground as he rushed 8 times for 42 yards on the day.  Wide receiver James Washington was the leading receiver for the Steelers as he caught 5 passes for 83 yards.  The Steelers gained a total of 229 yards while allowing 261 total yards to the Bills.

With the loss to Buffalo, Pittsbrugh is now 8-6 on the season and they are currently in 2nd place in the NFC North.  Quarterback Delvin Hodges has now thrown for 884 yards and 5 touchdowns this season against 6 interceptions.  Pittsburgh’s other quarterback is Mason Rudolph who has thrown for 1,636 yards and 12 touchdowns against 9 interceptions on the season.  The leading rusher for the Steelers is James Conner who has rushed 110 times for 432 yards and 4 touchdowns on the year.  James Washington has been the leading receiver so far this season for Pittsburgh as he has caught 39 passes for 694 yards and 3 touchdowns.  Pittsburgh enters Sunday’s game with 2 players listed on their injury report as Vance McDonald and JuJu Smith-Schuster are listed as out.

The New York Jets welcome the Pittsburgh Steelers to town on Sunday after losing their last game 42-21 against the Baltimore Ravens.  Jets quarterback Sam Darnold completed 18 of 32 passes for 218 yards and 2 touchdowns against 1 interception.  Running back Le’Veon Bell had 21 carries for 87 yards and was the Jets leading rusher.  Jamison Crowder led New York in receiving as he caught 6 passes for 90 yards and 2 touchdowns.  New York gained a total of 310 yards while allowing 430 yards against the Ravens.

After the loss to the Ravens, the Jets are now 5-9 on the season and are in 3rd place in the AFC East.  Quarterback Sam Darnold has thrown for 2,642 yards and 17 touchdowns against 12 interceptions this season.  Le’Veon Bell is the Jets leading rusher and has carried the ball 204 times for 676 yards and 3 touchdowns.  Wide receiver Robby Anderson is the leading receiver for New York as he has caught 47 passes for 729 yards and 4 touchdowns on the year.  New York enters Sunday’s game with 5 players listed on their injury report as Jamal Adams, Brian Poole, Demaryius Thomas, Quinnen Williams and Arthur Maulet are all listed as out.