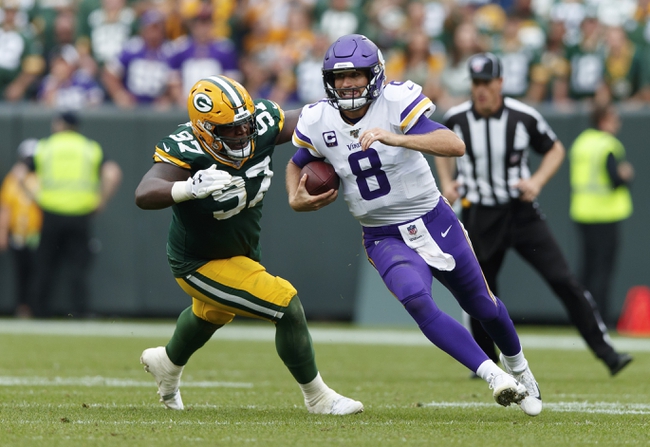 The Oakland Raiders and the Minnesota Vikings meet in a week 3 inter-conference matchup in NFL action from U.S. Bank Stadium on Sunday afternoon.

The Oakland Raiders will look to rebound after their first loss of the season, coming in the form of a 28-10 loss to Kansas City last time out. Derek Carr has thrown for 457 yards, 2 touchdowns and 2 interceptions on 70.3% passing while Josh Jacobs leads Oakland in rushing with 184 rushing yards with 2 touchdowns. Tyrell Williams leads Oakland’s receiving group with 151 receiving yards and 2 touchdowns while Darren Waller has 133 receiving yards and a team-high 13 receptions this season. Defensively, Tahir Whitehead leads the Raiders with 13 tackles and Lamarcus Joyner is 2nd with 12 total tackles with a team-high 11 solo tackles and Benson Mayowa leads Oakland with 3.5 sacks this season. As a team, Oakland is averaging 332 yards of total offense and 17 points per game while allowing 415 yards of total offense and 22 points per game this season.

The Minnesota Vikings will also look to rebound from their first loss of the season, falling to Green Bay in their last outing by a final score of 21-16. Kirk Cousins has thrown for 328 yards, 2 touchdowns and 2 interceptions on 52.4% passing while Dalvin Cook leads Minnesota in rushing with 265 yards on the ground with 3 touchdowns. Adam Thielen leads Minnesota’s receiving group with 8 catches for 118 yards and a touchdown. Defensively, Harrison Smith leads the Vikings with 15 total tackles while Eric Kendricks has 14 tackles and Danielle Hunter and Linval Joseph each have a pair of sacks this season. As a team, Minnesota is averaging 345 yards of total offense and 22 points per game while allowing 340 yards of total defense and 16.5 points per game this season.

I honestly think that what we saw from Oakland in week 1 against Denver is probably the best we are going to see the Raiders this season, and while lots of teams have lost to the Chiefs, the Raiders lost at home and now have to go to one of the tougher road environments in the entire league. Minnesota lost a tough one to the Packers last time out, but the Vikings hung tough and are heads and shoulders the better team in this one. I think the Vikings are more than capable of winning this one by double digits at home, so I’ll lay the points with Minnesota here.