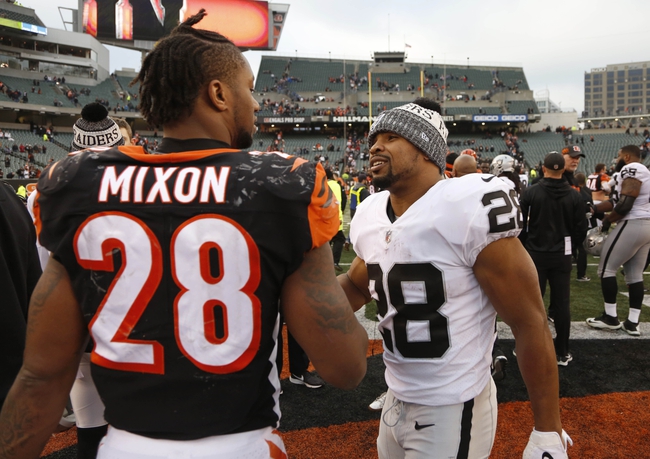 The Cincinnati Bengals travel to Oakland, to take on the Raiders.  The Bengals (0-9) are searching for their first win of the season.  The Bengals most recently were blown out by the Ravens, 49-13.  The Oakland Raiders have won 2 in a row, to push their record to (5-4).  The Raiders are coming off a narrow 26-24 win over the Chargers.

In the Bengals loss to the Ravens, the Bengals were led by Ryan Finley.  Finley was 16 of 30 for 167 yds, while throw 1 touchdown and interception.  Bengals running back Joe Mixon eclipsed the 100 yd mark for the first time on the season, finishing with 114 yds on 30 carries.  Bengals were down 28-0 at halftime.  The Ravens out gained the Bengals 379 to 307.  The Bengals had 3 turnovers in the game.

In the Raiders win over the Chargers, the Raiders were guided by Derek Carr.  Carr was 21 of 31 for 218 yds and a touchdown.  the raiders had to score late to record the win.  The score came via an 18 yd touchdown run by rookie Josh Jacobs.  Jacobs finished with 71 yds rushing on 16 carries. The Raiders picked off Philip Rivers 3 times and returned one of them for a touchdown.

Bengals are 1-5 ATS in their last 6 games overall.

Bengals are 7-2 ATS in their last 9 road games.

Raiders are 7-1 ATS in their last 8 home games.

Raiders are 4-1 ATS vs. a team with a losing record.

The over is 6-1 in Raiders last 7 games overall.

The Bengals are 5-1 ATS in the last 5 meeting against the Raiders.  This game is a battle of two of the worse defenses in the league in points allowed.  The Bengals are allowing over 28 per game which ranks 29th.  The Raiders are allowing over 26 per contest and that ranks 26th.  The over has cashed nicely in the Raiders last 7 games.  While the under has been near perfect in the last 8 road games for the Bengals, I like the over here.  This is a game that could see the Raiders scoring near 40 points themselves.  The Bengals defense will allow enough point and offensively will score just enough to push this total over.  Final score prediction, Raiders win and the total goes over, 34-20.