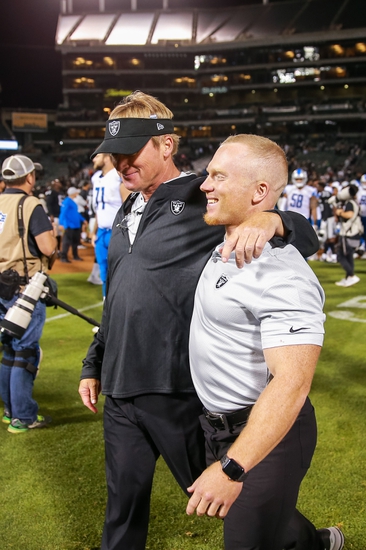 On Sunday, The Detroit Lions head West for a game against the Oakland Raiders. In their last game the Lions were able to defeat the New York Giants 31-26 and get to .500 on the season.  Lions quarterback Matthew Stafford completed 25 of 32 passes for 342 yards, 3 touchdowns and an interception. The Lions leading receiver was Kenny Golladay, who caught 6 passes for 123 yards and 2 touchdowns. Tra Carson was the Lions most productive runner carrying the ball 12 times for just 34 yards as the running game was never able to get started against the Giants defense. While the Lions defense played well against the run, giving up just 80 yards on the day, the same cannot be said about their play against the passing game, as New York Giants quarterback Daniel Jones threw 4 touchdown passes and 322 yards.

On the year the Lions are now 3-3-1 Including a road record of 1-1-1.  The Lions passing game has been efficient all season as quarterback Matthew Stafford has thrown for 2,093 yards, 16 touchdowns and 4 interceptions. Unfortunately for the Lions, running back Kerryon Johnson has been ruled out for at least most of the season as he was the Lions lead rusher with 308 yards and 2 touchdowns on 92 carries so far this season.  For now, it appears that the Lions will be working with a running by committee for their rushing game. For the year, the Lions are averaging scoring 25.7 points per game and allowing 25.6 yards per game.  Kenny Golladay Has been the team's leading receiver and has caught 31 passes for 508 yards and 6 touchdowns. If there is any flaw with the Lions defense it is in their passing yards allowed as they have allowed an average of 302.6 yards per game against giving up 130.7 rushing yards per game and it's something that Oakland will look to take advantage of this Sunday.

The Oakland Raiders return home on Sunday for their match up with the Lions after losing 27-24 on the road last week against the Houston Texans. In the game against the Texans, Raiders quarterback Derek Carr threw for 285 yards and 3 touchdowns while completing 18 of 30 passes. Rookie running back Josh Jacobs who is having a successful season, never got going against the Texans defense a he carried the ball 15 times for 66 yards. Tyrell Williams was the Raiders leading receiver as he caught 3 passes for 91 yards and a touchdown. Carr’s other touchdown passes were caught by Hunter Renfrow and Darren Waller.  The Raiders defense played well against the run allowing Houston to gain just 93 yards on the ground. However, the same cannot be said about their defense against the passing game is they allowed 285 yards through the air against the Texans.

On the year the Oakland Raiders are 3-4 but do have a winning record of 2-1 at home in their last season in Oakland.  Derek Carr has thrown from 1,695 yards on the year while throwing 11 touchdown passes and 4 interceptions. Running back Josh Jacobs has carried the ball 124 times for 620 yards and 4 touchdowns and is the Raiders most productive running back. Darren Waller has been the most productive Oakland Raider in terms of receiving, as he is caught 46 passes for 496 yards and 3 touchdowns. On the year, the Raiders are scoring 21.6 points per game and allowing 27.4 points per game. Although the offense averages 378.7 yards per game the defense is allowing 391.3 yards per game and is the weak point of this Raiders team.

For my pick I have to go with the Detroit Lions to come out of Oakland with the win. While the Raiders offense does produce, their defense will not be good enough to contend in a game against a quarterback like Matthew Stafford, even if he is without a solid running game. The Lions defense will have to play better than they did in their last game, however, it is a completely different scenario facing Derek Carr as compared to Deshaun Watson. Lions win this one 28-24.