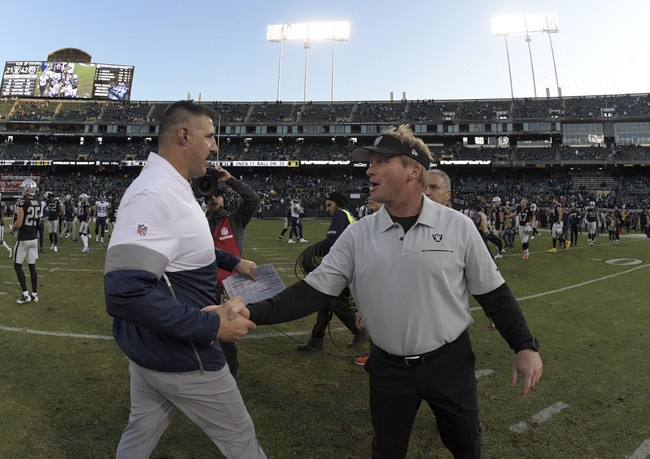 The Jacksonville Jaguars hit the road for a clash with the Oakland Raiders.  The Jaguars are (4-9), after falling to the Los Angeles Chargers, 45-10.  The Raiders are (6-7), coming off a 42-21 loss to the Tennessee Titans.

In the Jaguars loss to the Chargers, Jacksonville was led on offense by Gardner Minshew.  Minshew completed 24 of 37 passes for 162 yds and 1 touchdown.  The jaguars were out dominated throughout the game, being out gained offensively, 525 to 252.  Jacksonville struggled against to stop the run, allowing the Chargers to register 195 yds on the ground.  The Jaguars had 10 penalties in the game.

In the Raiders loss to the Titans, Oakland was led on offense by Derek Carr.  Carr was 25 of 34 passing for 263 yds and 2 touchdowns.   The game was tied at 21 at the half, but the Titans scored 21 points in the 2nd half, which left the Raiders with a home loss.  The Raiders were out gained, 552 to 356.  Oakland allowed 161 yds rushing en route to the loss.

Raiders are 0-4 ATS in their last 4 games overall.

Both teams have been scuffling here to say the least.  Jacksonville has lost 5 in a row, while Oakland has lost 3 in a row. The Jaguars in this 5 game losing skid have been out scored,  174 to 57.  The Raiders in their 3 game stretch with out a win, have been out scored, 116 to 33.  Both teams have been getting dominated from top to bottom, so this could end up being a pretty good game.  This will be the last home game in Oakland for the Raiders.  The Raiders fans should be in full force for the last home game in Oakland.  I'll side with Oakland even though it is uncertain whether Josh Jacobs will suit up.  Final score prediction, Raiders win and cover at home, 27-20.