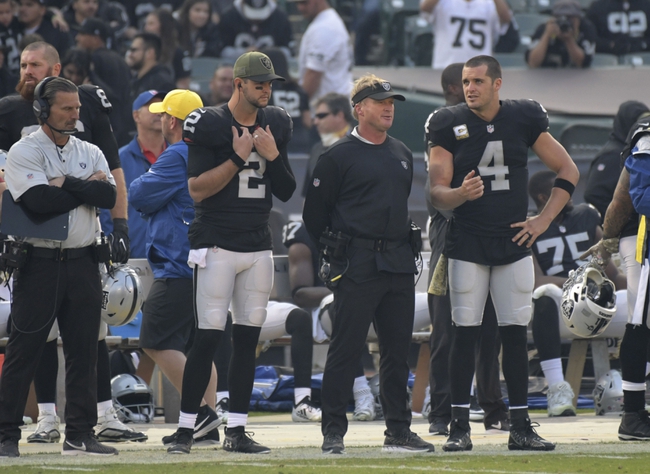 In the win over the Packers, the Phillip Rivers was 21 of 28 for 294 yds.  Melvin Gordon added 80 yds rushing on 20 carries and 2 scores. Mike Williams hit the 100 yd mark in receiving yds in the win, reeling in 3 catches for 111 yds.  Chargers kicker Michael Badgley was 4 of 5 on field goals, with a long of 43 yds.The chargers held the Packers to just 184 yds of total offense.  The Chargers accumulated 442 yds on the day.  There were no turnovers in the game.

Derek Carr completed 20 of 31 passes for 289 yds and 2 TD's.  Josh JAcobs put the team on his back out of the backfield, Jacobs rushed for 120 yds on 28 carries for 2 touchdowns.  The Raiders were out gained on the day 473 to 450.  The Raiders needed a big defensive stop to hold on for the win.  The Lions had the ball 4th and goal from the 1yd line, the Raiders forced a turnover on downs in the final seconds.  Things could have been much worse for the Raiders, the Raiders fumbled 3 times, luckily none of the fumbles were lost.

Chargers are 4-0 ATS in their last 4 Thursday games.

Raiders are 6-1 ATS in their last 7 home games.

Raiders are 4-1 ATS in their last 5 games overall.

The Chargers have been the better of the two teams in the last 10 games in this series, winning 6 of 10.  The Raiders though have been pretty unstoppable at home ATS and it's been very profitable.  Josh Jacobs is questionable right now for Oakland, if Jacobs is able to go, I like the Raiders at home.  This could be a spot where the Chargers come out flat, after beating a very good Packers team.  Final score prediction, Raiders win 24-21.