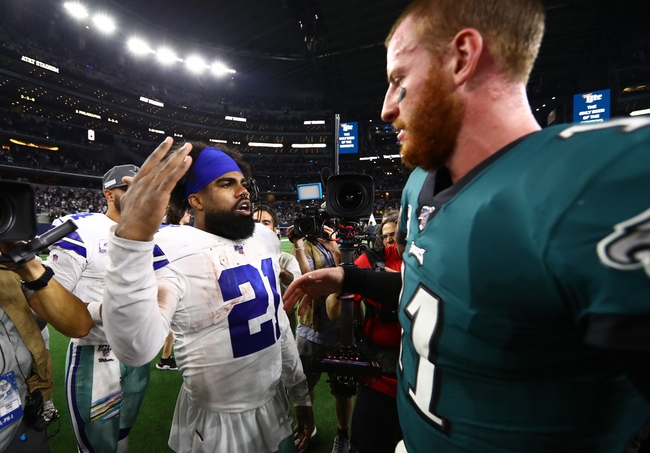 The Dallas Cowboys are on the road for a critical divisional game with the Philadelphia Eagles.  The Cowboys are (7-7), coming off a convincing win over the Los Angeles Rams, 44-21.  The Eagles are also (7-7), after a 37-27 road win over the Washington Redskins.

In the Cowboys win over the rams, Dallas was led offensively by quarterback Dak Prescott.  Prescott completed 15 of 23 passes for 212 yds and 2 touchdowns.  Tony Pollard added 131 yds rushing on 12 carries and a score.  Ezekiel Elliot registered 2 rushing touchdowns.  The Cowboys took it to the Rams, leading 31-7 at the end of the 3rd quarter.  Dallas out gained Los Angeles, 475 to 289.  The Cowboys got up by so many points, the Rams had to get away from the run game.  The Cowboys out rushed the Rams, 263 to 22.

In the Eagles win over the Redskins, Philadelphia was guided throughout the game by quarterback Carson Wentz.  Wentz was phenomenal in the win, completing 30 of 43 pass attempts for 266 yds and 3 touchdowns.  Miles Sanders added 122 yds rushing on 19 carries and a touchdown, while also recording a receiving score.  The Eagles out gained the Redskins, 415 to 362.  Philadelphia dominated the time of possession, 36:57 to 23:03.

The favorite is 7-1 ATS in the last 8 matchups in this series.  The Cowboys snapped their 3 game losing streak in the win over the Rams.  The Cowboys have had a decently tough schedule over the last 4 weeks.  The Eagles have won 2 in a row, but have lost 3 of their last 5.  The Eagles have faced 3 teams with 3 wins or less in the last 3 weeks.  One of those games included a 37-31 loss to the Dolphins.  The Eagles defense should have its hands full, as the Cowboys have the 5th highest scoring offense in the league, averaging 27 points per game.  Seeing that the Eagles gave up 37 points to Miami, I'll side with the Cowboys to get the job done against a beatable Eagles defense.  Final score prediction, Cowboys will win and cover, 26-20.

The pick in this article is the opinion of the writer, not a Sports Chat Place site consensus.
Previous Pick
Los Angeles Chargers vs. Oakland Raiders - 12/22/19 NFL Pick, Odds, and Prediction
Next Pick
Chicago Bears vs. Kansas City Chiefs-12/22/19, NFL, Odds, Pick, & Prediction