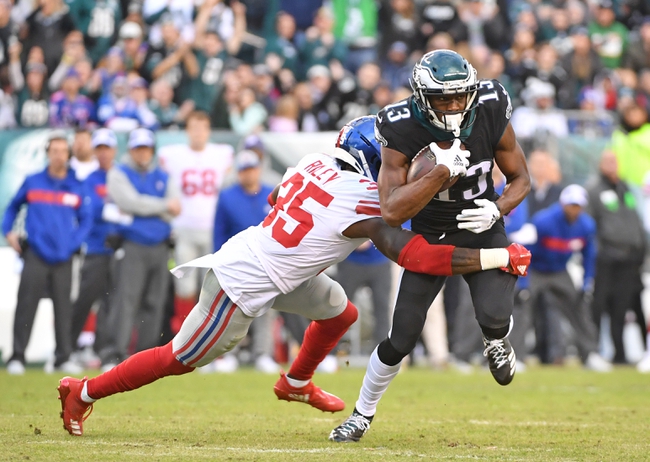 The New York Giants are on the road for a Monday Night Football prime time matchup with the Philadelphia Eagles.  The Giants are (2-10), after losing 31-13 at home to the Green Bay Packers.  The Eagles are (5-7), coming off a 37-31 loss to the Miami Dolphins.

In the Giants loss to the Packers, Giants were led by quarterback Daniel Jones.  Jones completed 20 of 37 for 240 yds, while throwing 1 touchdown and 3 picks.  Saquon Barkley added 83 yds rushing in the game.  The Giants out gained the Packers, 335 to 322 in the loss.  The Giants were able to out gain the Packers, but 3 Jones interceptions stalled New York drives.

Giants are 2-6 ATS in their last 8 games overall.

The over is 4-1 in Giants last 5 games overall.

Eagles are 2-5 ATS in their last 7 games overall.

It looks like Eli Manning will be the starting quarterback in this matchup, come Monday night.  Both teams are on a losing streak, the Giants have dropped 8 in a row, while the Eagles have lost 3 in a row. Lets face it, the Eagles just loss to the Dolphins.  Actually lets put it this way, the Eagles gave up 37 points to a Dolphins offense that ranks 29th in points scored per game.  This is a must win for the Eagles, but I also think Manning will have something to prove in this one.  It would not surprise me if Manning came out and led the Giants to a victory.  However, I'll be safe and take the points.  Final score prediction, Eagles win and the Giants cover, 27-24.