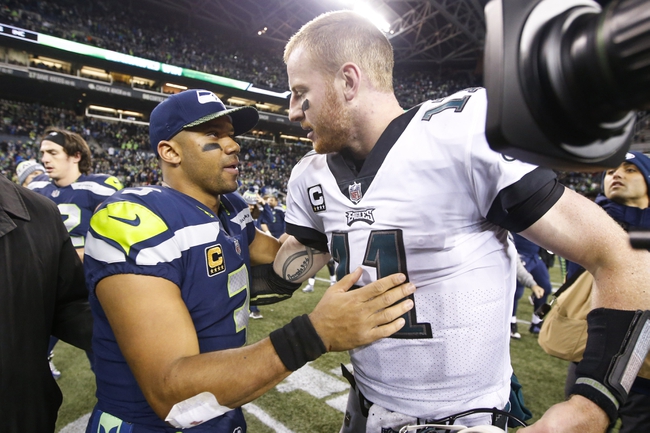 The Seattle Seahawks head East on Sunday for their game against the Philadelphia Eagles in a game between two teams in the NFC.  In their last game, the Seahawks defeated the San Francisco 49ers by the score of 27-24 in overtime which was the 49ers first loss of the season.  Seattle quarterback Russell Wilson completed 24 of 34 passes for 232 yards, a touchdown and an interception.  Chris Carson led the way for the Seahawks on the ground, carrying the ball 25 times for 89 yards and a touchdown.  D.K. Metcalf was Seattle’s leading receiver on the night as he caught 6 passes for 70 yards.  The Seattle defense allowed a total of 302 yards to the 49ers but only allowed 87 on the ground.

With the win, Seattle is now 8-2 on the season including a 5-0 record on the road which places them in 2nd place in the NFC West.  Russell Wilson has thrown for 2,737 yards and 23 touchdowns on the season against just 2 interceptions.  Chris Carson has carried the ball 200 times for 852 yards and 4 touchdowns.  Tyler Lockett has been the lead receiver for Seattle as he has caught 62 passes for 793 yards and 6 touchdowns so far this season.  Seattle enters their game against Philadelphia with 2 players listed on their injury report as Tyler Lockett is listed as questionable while Luke Wilson is listed as doubtful.

The Philadelphia Eagles enter Sunday’s game after a loss in their last game by the score of 17-10 to the New England Patriots.  In the game against New England, Philadelphia quarterback Carson Wentz completed 20 of 40 passes for 214 yards and a touchdown.  Running back Miles Sanders had a hard time rushing in the game but led the Eagles on the ground with 11 carries for 38 yards.  Tight end Zach Ertz led the Eagles in receiving as he caught 9 passes for 94 yards in the game.

After the loss, the Eagles are now 5-5 on the season which places them in 2nd place in the NFC East.  Quarterback Carson Wentz has thrown for 2,274 yards and 16 touchdowns this season against 4 interceptions.  Jordan Howard has been the Eagles leading rusher as he as carried the ball 119 times for 525 yards and 6 touchdowns on the season.  The lead receiver for Philadelphia is tight end Zach Ertz who has caught 55 passes for 621 yards and 2 touchdowns on the year.  Philadelphia enters Sunday’s game pretty banged up as they have 4 players listed on their injury report as Nigel Bradham, Alshon Jeffery and Jordan Howard are listed as out while Lane Johnson is listed as questionable.