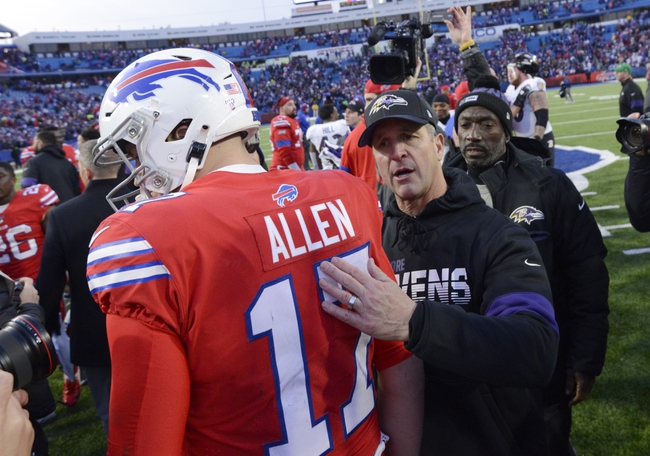 In the Bills loss to the Ravens, Buffalo was led on offense by Josh Allen.  Allen completed 17 of 39 passes for 146 yds and a touchdown.  Cole Beasley added 4 receptions for 29 yds and a touchdown.  The Bills were out gained on offense by the Ravens, 257to 209.  Buffalo struggled on 3rd down, converting just 4 times out of 17 chances.  Bills kicker Stephen Hauschka connected on all 3 field goal attempts, with a long of 48 yds. Each team had one turnover in the game.

In the Steelers win over the Cardinals, Pittsburgh was guided throughout the game by quarterback Delvin Hodges.  Hodges was 16 of 19 passing for 152 yds a passing touchdown.  Diontae Johnson contributed an 85 yd punt return for a touchdown, while also snagging a 2 yd receiving touchdown.  The Steelers out gained the Cardinals 275 to 236.  Pittsburgh committed 2 turnovers, but forced 3 in the game.

The under is 5-1 in Bills last 6 games overall.

Steelers are 5-1 ATS in their last 6 games overall.

The under is 5-0 in Steelers last 5 games overall.

The Bills are 1-5 ATS in the last 6 matchups with the Steelers.  In what is expected to be a big defensive battle, the first team to 17 points may end up winning this one.  Buffalo has struggled ATS in recent games against the Steelers.  HoHowever, Buffalo has been great on the road this year, having gone 5-1 to this point.  Both defense's rank in the top 6th in scoring defense.  Each defense has been stellar against the pass, allowing less than 210 yds passing per game.  This game could come down to which team can run the ball better.  I have more faith in the Bills Allen and Devin Singletary, as Steelers running back Blake Snell had a lost fumble last week.  With the Steelers banged up, this is the week it starts to show, going up against a stout Buffalo defense.  Final score prediction, Bills will outright win, 17-16.