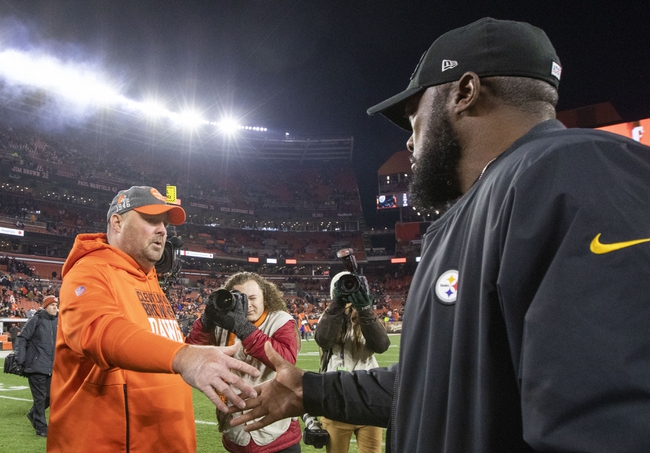 The Cleveland Browns hit the road for a contest with the Pittsburgh Steelers.  The Browns are (5-6) thus far, coming off a 41-24 win over the Miami Dolphins.  The Steelers are )6-5), after winning 16-10 over the Cincinnati Bengals.

In the Brown win over the Dolphins, Cleveland was led on offense by Jarvis Landry.  Landry hauled in 10 receptions for 148 yds and 2 touchdowns.  Quarterback Baker Mayfield was 24 of 34 for 327 yds, while throwing 3 touchdowns and 1 pick.  The Browns out gained the Dolphins 467 to 284.  The Browns nearly had 150 yds rushing in the game, finishing with 147.  The Browns forced 2 turnovers in the win.

In the Steelers win over the Bengals, Pittsburgh was guided on offense by backup quarterback Delvin Hodges.  Hodges took over for Mason Rudolph in the game.  Hodges completed 5 of 11 for 118 yds and a touchdown.  The touchdown was a 79 yd strike to James Washington.  The Steelers out gained the Bengals 339 to 244.  The Steelers were able to force 2 turnovers en route to the victory.

Steelers are 7-2 ATS in their last 9 games overall.

The under is 5-1 in Steelers last 6 games overall.

The home team is 4-1-1 ATS in their last 6 matchups.  Cleveland has won 3 in a row, including a win over the Steelers 21-7, 2 weeks back.  The Steelers have won 5 of 6 heading into this matchup.  The Steelers are at home and the home team has had success in this matchup in covering the spread in the last 6 matchups.  This game is expected to be low scoring for good reason.  The Steelers defense is only giving up an average of 18 points per game win at home.  The Steelers are still above .500 on the year and are still trying to make a playoff push.  I can't seen the Steelers losing to the Browns at home, therefore losing twice in the same season.  Steelers have looked better than the Browns in the last month overall.  I'll side with Pittsburgh.  Final score prediction, Steelers out right win, 21-17.