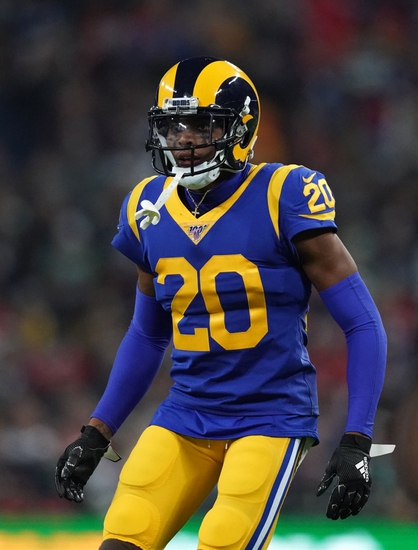 The Los Angeles Rams head to Pittsburgh, PA this weekend for a match up with the Steelers.  In their last game, the Rams defeated the still winless Cincinnati Bengals in London by the score of 24-10.  Rams quarterback Jared Goff had a field day against the Bengals defense and completed 17 of 31 passes for 372 yards and 2 touchdowns.  One of Goff’s touchdown passes as caught the LA’s lead receiver on the day, Cooper Kupp who caught 7 passes for 220 yards and 1 touchdown.  Darrell Henderson Jr. was the Rams leading rusher on the day as he carried the ball 11 times for 49 yards.  Meanwhile, running back Todd Gurley II ran 11 times for 44 yards and a touchdown.

On the year the Rams are 5-3 and currently sit in 3rd place in the stacked NFC West.  Rams quarterback Jared Goff has thrown for 2,367 yards, 11 touchdowns and 7 interceptions and isn’t having the type of year he would have hoped for.  Cooper Kupp is the Rams leading receiver as he has caught 58 passes for 792 yards and 5 touchdowns on the season.  LA is led in rushing by running back Todd Gurley II who as carried the ball 92 times for 355 yards and 6 touchdowns so far this year.  The Rams come into this week’s game healthier than most teams in the league as only wide receiver Brandin Cooks is listed on the team injury report as he is listed as questionable.

The Pittsburgh Steelers welcome the Los Angeles Rams into the Steel City after winning their last game against the Indianapolis Colts by the score of 26-24.  In the win, Steelers quarterback Mason Rudolph completed 26 of 35 passes for 1 touchdown while throwing 1 interception.  Jaylen Samuels was the Steelers lead receiver as he caught 13 passes for 73 yards.  Rudolph’s touchdown pass was caught by Vance McDonald who caught 5 passes for 30 yards to go along with his touchdown.  Trey Edmunds was the lead rusher for the Steelers in the game as he had 12 carries for 73 yards on the day.

With the win, the Steelers are now 4-4 on the season which is good enough for 2nd place in the AFC North Division.  Since taking over for Ben Roethlisberger, Mason Rudolph has thrown for 1,088 yards, 10 touchdowns and 4 interceptions.  JuJu Smith-Schuster has had a decent season thus far and is Pittsburgh’s lead receiver as he has caught 33 passes on the year for 459 yards and 3 touchdowns.  Running back James Conner has continued being productive out of Steelers backfield this season and has carried the ball 97 times for 380 yards and 4 touchdowns on the year.  There are 3 players listed on the Steelers injury report for this week as James Conner, Ramon Foster and Benny Snell Jr. are all listed a out.