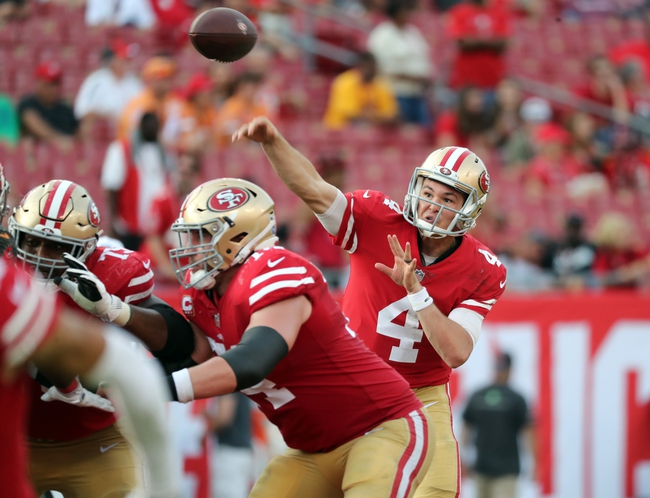 The Tampa Bay Buccaneers did the opposite of the 49ers, finishing with a 3-1 record, but winning their final three preseason games including a 17-15 victory over Dallas last time out. Ryan Griffin threw for 92 yards, a touchdown and two interceptions on 9 of 11 passing while Vincent Testaverde had 41 yards and a pick on 4 of 8 passing. Bruce Anderson III led the Bucs with 70 rushing yards and a touchdown on 20 carries while Andre Ellington had a team-high 34 receiving yards and Tanner Hudson had Tampa Bay’s lone receiving touchdown in the win. Defensively, the Buccaneers combined for 4 sacks, an interception and a pair of forced fumbles, one of which was recovered, while Emmanuel Smith led the Bucs with 6 tackles in the winning effort.

I honestly think both of these teams are going to be better than how they finished last season, but as far as this game goes, it’s hard for me to feel good about San Francisco without knowing how Jimmy Garoppolo really feels with this being his first real-time game action since tearing his ACL last season. Tampa Bay is one of the more underrated home environments in the NFL, and San Francisco wasn’t great on the road to begin with last season. I just think that Tampa Bay has fewer question marks, so I’ll lay the point with the Buccaneers to start the season with a victory here.