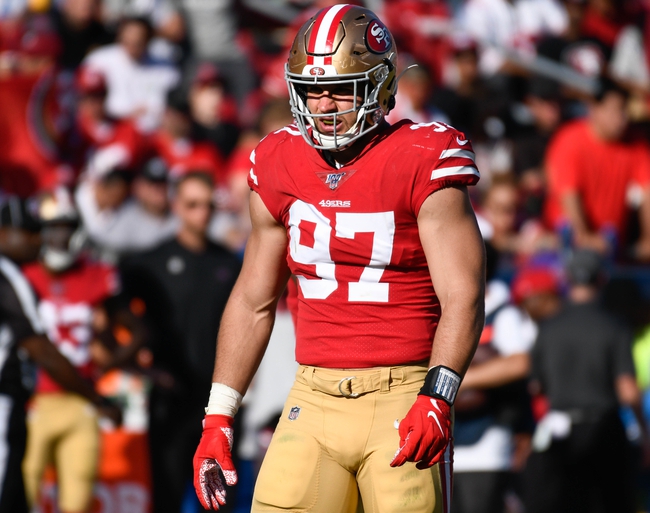 The Carolina Panthers are set to visit Levi’s Stadium in Santa Clara, California for an NFC clash against the San Francisco 49ers. The Carolina Panthers come into this matchup with a 4-2 record, and they will be looking to continue their success after winning their recent road game against the Tampa Bay Buccaneers, 37-26. QB Kyle Allen had a productive game through the air as he connected on 20 of his 32 pass attempts for 227 yards and 2 TDs. WR DJ Moore was the top target for Allen and the Panthers as he hauled in 7 catches for 73 yards.

The Carolina Panthers were good on the defensive side of the ball against the Tampa Bay Buccaneers as they held them to 268 yards of offense while forcing 7 turnovers. CB James Bradberry led the way for the Carolina defense as he contributed 11 tackles and 4 pass deflections while also contributing 2 interceptions. The Panthers were also able to receive interceptions from Ross Cockrell, Luke Kuechly, and Javien Elliott.

The San Francisco 49ers come into this matchup with a 6-0 record, and they will be looking to continue their success after winning their recent road game against the Washington Redskins, 9-0. QB Jimmy Garoppolo struggled to find any consistency through the air for the 49ers as he connected on 12 of his 21 pass attempts for 151 yards and 1 interception. RB Tevin Coleman received a heavy workload on the ground as he racked up 62 yards on 20 carries.

The San Francisco 49ers have been a pleasant surprise this season as they have stormed out to a 6-0 record, and a huge reason for that is their defense as they currently rank 2nd in the NFL in scoring defense (10.7 PPG). The Carolina Panthers have been a good story with backup QB Kyle Allen leading them, but the 49ers have a dangerous pass rush with Bosa, Buckner, and Ford which should disrupt the backup on the road. The 49ers have a new piece to add to their offense as they traded for Emmanuel Sanders, and that will allow Garoppolo to have two top targets to throw to (Kittle & Sanders).