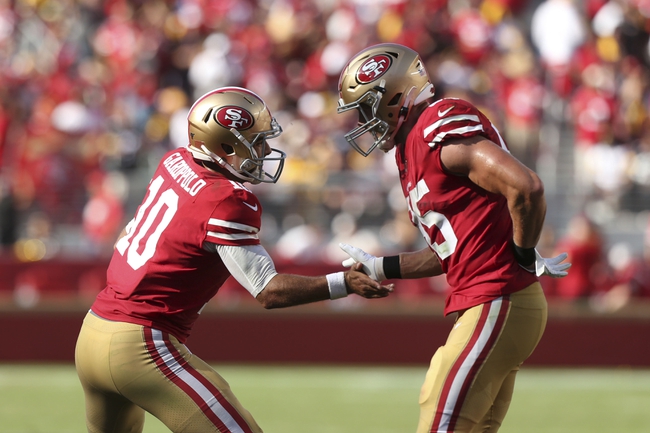 In Monday night NFL Football on ESPN, the Cleveland Browns will invade Levi’s Stadium to face the San Francisco 49ers. The Browns entered the season with plenty of hype, but look lost through the first three weeks. On Sunday, Cleveland answered the bell with a convincing 40-25 road victory against Baltimore. The Browns outgained the Ravens by a 530-395 margin and forced three turnovers on the day.

Cleveland QB Baker Mayfield completed 20 of his 30 passes for 342 yards and a touchdown. RB Nick Chubb carried the ball 20 times for 165 yards and three touchdowns.

The San Francisco 49ers had a bye in week four and are the only undefeated team in the NFC. Last time out, San Francisco managed to overcome five turnovers during a 24-20 home victory versus Pittsburgh. Jimmy Garoppolo was 23-of-32 for 277 yards and a touchdown, while Raheem Mostart chipped in 79 yards on the ground for the 49ers.

San Francisco dominated a number of statistical categories, including a 26-11 advantage in first downs gained. The 49ers converted 6-for-11 on third down and outgained the Steelers by nearly 200 total yards.

Cleveland WR Jarvis Landy suffered a concussion in last week’s victory and is considered questionable for this contest. San Francisco RB Tevin Coleman (ankle) has not played since week one and could play on Monday night. The Browns are the trendy pick in this spot, but the 49ers have a better offensive line and are better coached. Final Score Prediction, San Francisco 49ers 27-20.