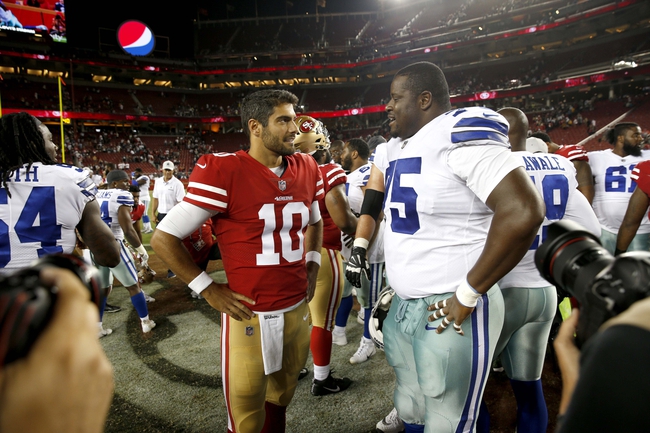 The Dallas Cowboys are coming off their third double-digit winning season for the third time since 2010 and this feels like a make or break season for Jason Garrett. The things to watch for the Cowboys this preseason is wide receiver depth, as it’s anyones guess once you get beyond the starters in Randall Cobb, Amari Cooper and Michael Gallup. There’s also a true backup QB battle between Cooper Rush and Mike White, as neither of those guys have played well when given chances. Defensively, you always have to pay attention to linebacker for the Cowboys given Sean Lee’s injury history and how badly that always cripples this side of the ball. There’s many rookies who could steal a roster spot at this position, including Jalen Jelks, Nate Hall and Luke Gifford. The Dallas Cowboys have lost five of their last seven preseason games.

The San Francisco 49ers have won a combined 12 games the last three years, but there’s progress being made and Kyle Shanahan has a much healthier roster than a year ago. C.J. Beathard and Nick Mullens will have one of the better backup QB battles in the league behind starter Jimmy Garoppolo, while there appears to be a logjam at wide receiver with five contributors from a year ago returning and the addition of Jordan Matthews this offseason. There’s also questions about who will be the starting cornerback on the opposite side of Richard Sherman given the health questions of Jason Verrett. Ahkello Witherspoon or Tarvarius Moore could make a splash during the preseason, and even if they don’t take a starting role, they could certainly earn playing time as the No. 3 or No. 4 options throughout the season. The San Francisco 49ers have lost five of their last seven preseason games.

I'm pretty sure the Cowboys aren't going to play Dak Prescott much in this game, if at all, which means you're getting a full contest of Rush and White at QB, two guys who haven't looked good when on the field. The San Francisco 49ers have two QB's who have started games on this level and have flashed promise from time to time, so I'm sure both could carve up second and third unit defenses. Quarterback play goes a long way with me when betting preseason, as it's the one constant in a game where there's so many guys rotating at every other position. The 49ers have a clear edge at QB in this contest. I'll lay the chalk.