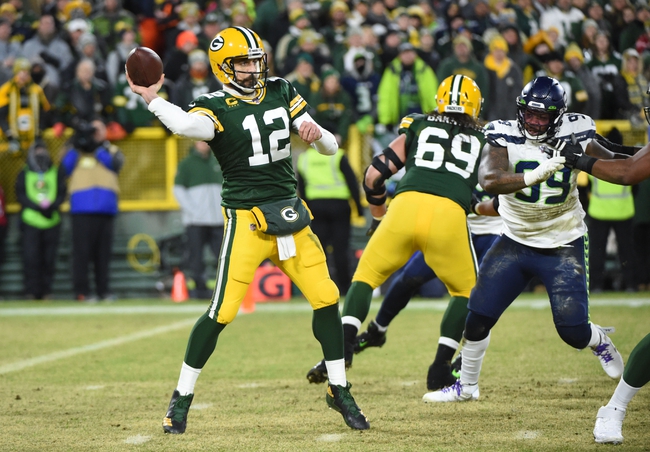 On Sunday, the Green Bay Packers visit Levi's Stadium in Santa Clara California to play the San Francisco 49ers in the NFC Championship Game. Green Bay (13-3, 6-2 road) defeated the Seattle Seahawks 28-23 on Sunday in their NFC divisional round matchup. Green Bay took a 21-3 halftime lead but had to hold on in the end. Aaron Rodgers threw for 243 yards and two touchdowns, while Devante Adams had 160 yards receiving and two touchdowns.

San Francisco (13-3, 6-2 home) defeated the Minnesota Vikings on Saturday 27-10 in their NFC division matchup. Jimmy Garoppolo passed for 131 yards, one touchdown and one interception. while Tevin Coleman led the ground game with 105 yards and two touchdowns. Deebo Samuel was the leading receiver with 42 yards. However, it was the defense that shut down the Minnesota offense holding Minnesota to just 147 total yards and forcing two turnovers. The 49ers had nearly 17 minutes more in possession than the Vikings.

In one postseason game, Jimmy Garoppolo has thrown for 131 yards, one touchdown and one interception, while Tevin Coleman has rushed for 105 yards and two touchdowns. The leading receiver for the 49ers is Deebo Samuel with three receptions for 42 yards while Kendrick Bourne has caught three passes for 40 yards and one touchdown. Fred Warner leads all tacklers for the 49ers with seven, while Nick Bosa has six tackles and two quarterback sacks.

San Francisco's defense looked excellent in its victory over Minnesota allowing only 147 yards of total offense. However, the 49ers will be playing against a much more talented and experienced quarterback in Aaron Rodgers. The Packers have shown to be multi-dimensional of late with Aaron Jones in the back field and Davante Adams once again healthy and at the top of his game at wide receiver. Green Bay's defense has also improved and will be the difference in this game. A road dog upset in this one. Final Score Prediction, Green Bay Packers win 24-23