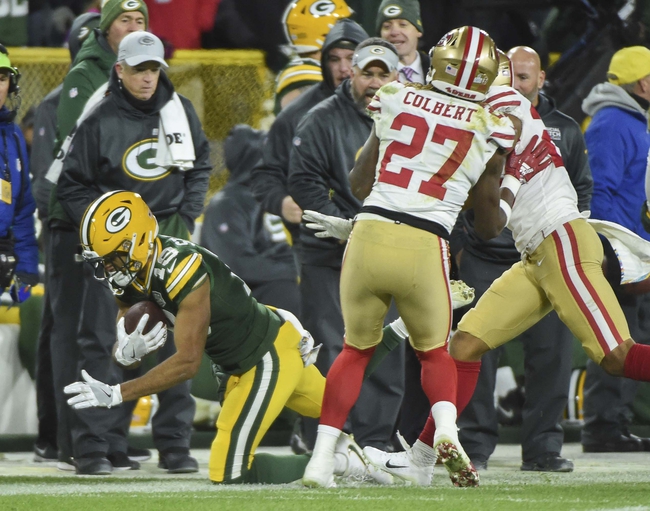 The Green Bay Packers head to California on Sunday for a game against the San Francisco 49ers in a battle of 2 top tier NFC teams.  The Packers come into Sunday’s game after defeating the Carolina Panthers in their last game by the score of 24-16.  In the game against the Panthers, Packers quarterback Aaron Rodgers completed 17 of 29 passes for 233 yards with no touchdowns and no interceptions.  Running back Aaron Jones continued his solid season as he rushed 13 times for 93 yards and scored 3 touchdowns.  The lead receiver for Green Bay was Davante Adams who caught 7 passes for a total of 118 yards.  The Packers defense allowed 401 total yards against the Panthers including 281 through the air.

With the win, Green Bay is now 8-2 on the season and are in 1st place in the NFC North.  Aaron Rodgers has thrown for 2,718 total yards and 17 touchdowns this season against just 2 interceptions.  Running back Aaron Jones has carried the ball 135 times for 589 yards and 11 touchdowns.  Davante Adams leads the Packers in receiving on the year as he has caught 39 passes for 537 yards but has yet to record a touchdown.  The Packers come into Sunday’s game healthy, as no players are listed on their injury report.

The San Francisco 49ers welcome the Green Bay Packers into town after a win in this last game, defeating the Arizona Cardinals by the score of 36-26.  In order to get the win, the 49ers had to battle back late in the game, outscoring the Cardinals 19-7 in the 4th quarter.  Jimmy Garoppolo completed 34 of 45 passes while throwing for 4 touchdowns against 2 interceptions.  Tevin Coleman led the way for San Francisco on the ground but was never really able to get started as he rushed 12 times for just 14 yards.  Deebo Samuel was the 49ers leading receiver in the game as he caught 8 passes for 134 yards.  The San Francisco defense allowed a total of 266 yards to Arizona, including 135 on the ground.

With the win, San Francisco is now 9-1 on the season and in 1st place in the NFC West.  Jimmy Garoppolo has thrown for 2,478 yards this season along with 18 touchdown passes against 10 interceptions.  Matt Breida has been the 49ers leading rusher as he has carried the ball 109 times for 542 yards and 1 touchdown.  Tight end George Kittle has been the 49ers lead receiver on the season as he has caught 46 passes for 541 yards and 2 touchdowns.  The 49ers enter Sunday’s game pretty banged up as they have 5 players listed on their injury report as Joe Staley and George Kittle are listed as out, Dee Ford is doubtful while Deebo Samuel and K’Waun Williams are listed as questionable.