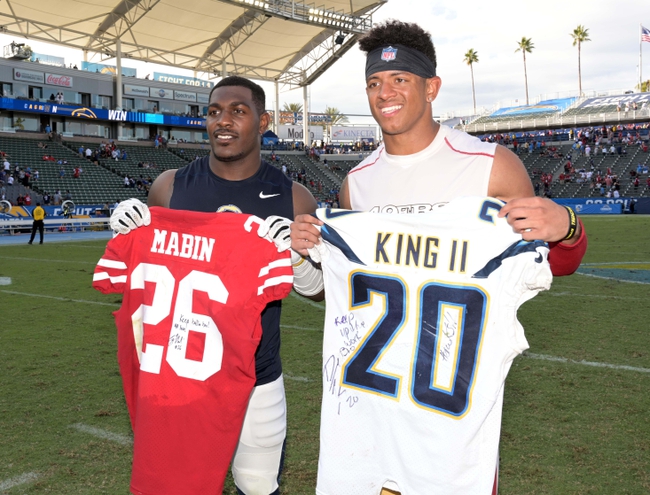 The Los Angeles Chargers are 0-3 in preseason play after a 15-23 loss to the Seattle Seahawks. Easton Stick and Tyrod Taylor combined for 143 passing yards and one touchdown. Taylor led the Chargers with 34 yards on six carries, while Artavis Scott had 66 receiving yards on four receptions. Defensively, Drue Tranquill led the Chargers with nine tackles, Chris Peace had one sack and Isaac Rochell had one tackle for loss. The Los Angeles Chargers are one of those teams that haven’t played their starters much at all, so it’s tough to judge them based on meaningless play. The Chargers are one of the more balanced teams in the league and as long as Philip Rivers doesn’t enter the regular season with much rust, this is a club capable of very special things. The Los Angeles Chargers have lost five of their last seven preseason games.

The San Francisco 49ers are 3-0 in preseason play after a 27-17 win over the Kansas City Chiefs. Jimmy Garoppolo and Nick Mullens combined for 257 passing yards and one touchdown. Jeff Wilson Jr. led the 49ers with 45 yards and two touchdowns on 12 carries, while Richie James had 66 receiving yards on four receptions. Defensively, Damontre' Moore led the 49ers with five tackles, Arik Armstead had 0.5 sacks and Jay Bromley had 0.5 sacks. The San Francisco 49ers have probably been the most impressive team through three weeks of preseason, as both sides of the ball have been consistent, and now they just got solid play from Garoppolo. While preseason success has little to do with what happens in the regular season, this has been a successful three weeks for the 49ers and indicates they may be on the right track. The San Francisco 49ers have split their last six preseason games.